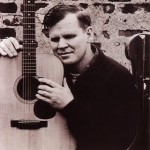 Doc Watson has had a profound influence in traditional, folk and bluegrass music ever since coming to national attention in the early 1960’s. His recordings and performances have inspired generations of aspiring guitarists to explore the mysteries of his phenomenal playing.

This album records Doc Watson’s first public solo appearance at the height of 60s folk music craze. He played an acoustic guitar at this performance, however he had to borrow it as he only had a Les Paul electric, which he had been making a living from in North Carolina in a rockabilly band.

This album features well know tunes such as Little Sadie and The Roving Gambler. He’s also joined by  folk  heroes John Herald, Ralph Rinzler, and Bob Yellin on some songs.

For a first public solo appearance Doc displays an amazing command ot the stage and the audience.