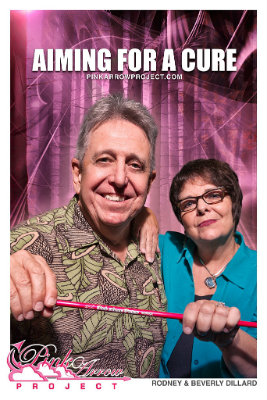 Rodney and Beverly Dillard have joined the Pink Arrow Project to help raise awareness to the organisation.

Rodney Dillard has had a long and varied career resulting in two Grammy Nominations, induction into the International Bluegrass Music Hall of Fame, a well-known acting stint on the Andy Griffith Show as part of The Dillards, many other movie, commercials and TV appearances, recipient of The Outstanding Missourian Award, and worldwide acclaim for his over 50 years of recording both traditional bluegrass and his own brand of ‘Dillardgrass’.

Rodney Dillard & The Dillard Band are now on tour including upcoming performances on February 8 at the Old Rock School in Valdese, NC and February 9 at the Historic Jonesborough Bluegrass Series in Jonesborough, Tennessee.  For more information on the band including their “Dillardgrass….often imitated, never duplicated” style of music, please visit www.rodneydillard.tv.

My wife, Beverly and I are proud to be a part of the Pink Arrow Project. Cancer has touched wonderful people in both of our families including Beverly’s mother. We stand with all who will work towards eradicating this disease – Rodney Dillard.

More on the Pink Arrow Project:

The Pink Arrow Project launched the On Target campaign last year that promotes their line of “Pink” archery products.  The campaign features the fictional character, Karingthat has proved popular with archery students, ranges, conventions, hunters, fans of The Hunger Games, the hit TV shows Revolution and Arrow, etc. Proceeds from the promotional posters and stickers are also helping in the fight against cancer and those in need.