Detour To A Better Place 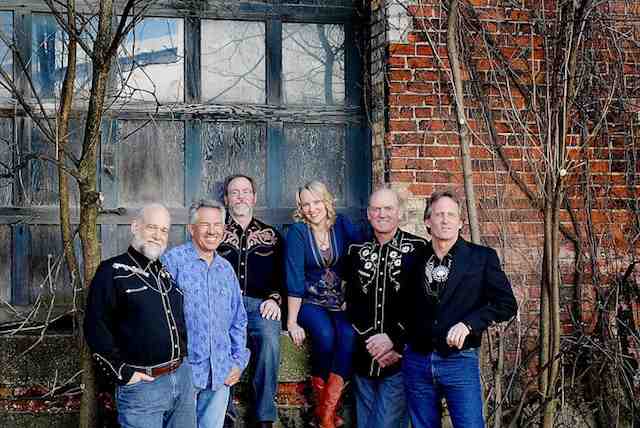 This new album from a relatively new 6-piece band Detour has everything needed to remain a favourite for years to come. Their harmonies are tight and features the beautiful and haunting lead vocal of Missy Armstrong. This is the freshest sounding bluegrass band I have heard in some years.

Detour features champion fiddler player Peter Knupfer along with Scott Zylstra on guitar, Jeff Rose on mandolin, Kevin Gaugier on banjo and Jack Grant on bass and of course Missy Armstrong on vocals

Detour is a Michigan-based bluegrass band that creates a beautiful and contemporary bluegrass sound. This album does not disappoint and the very generous 14 tracks on the album leaves you wanting to hear much more of this band. I hope we do.

Jeff Rose (mandolin, lead, harmony vocals) is the master musician whose original songs shape the Detour sound. Jeff’s bluegrass roots run deep in eastern Kentucky. He toured extensively for over twenty years with Iowa Rose, the High Canyon Ramblers and the Porkypines. He has also led numerous workshops on songwriting, mandolin and guitar technique. Jeff is one of the current reigning IBMA golf champions.

Scott Zylstra (guitar, lead, harmony vocals), is a master of tone, taste and timing and propels the band forward with his superb rhythm and tasteful lead work. Scott has played in a number of bands throughout Michigan, including the Porkypines. Scott is the owner of Frontier Recording, a highly successful recording and production studio where the band records and rehearses. Scott’s distinctive guitar style is always an immediate crowd favorite.

Jack Grant (bass, harmony and lead vocals) is Detour’s newest member. A veteran bass player, singer, and cat-lover from Western Michigan, Jack studied music as a kid and then taught himself to play bass. He says his musical interests are “all over the charts,” pun intended, including classical jazz, be-bop, reggae, and of course bluegrass: especially Alison Krauss and Union Station and Hot Rize. His favorite bass players include Oscar Pettiford, Paul Chambers, Charles Mingus, Niels-Henning Orsted Pedersen, Jimmy Blanton, Scott LaFaro, Jaco Pastorius, and Barry Bales. “Although I like many different kinds of music, my fave to play and sing is bluegrass. It’s not so loud, I love acoustic instruments and then there is the harmony singing. Plus there is a drive that can be had that is delicious.”

Peter Knupfer has been a professional bluegrass, folk, swing and jazz fiddle player for over 30 years. He has performed with Byron Berline, Joel Mabus, Alan Munde, Donald Stiernberg, John McCuen, Tony Trischka, Bill Evans, Bill Keith, Tim O’Brien, Peter Wernick, Greg Cahill, Peter Ostroushko and Howard Levy. Peter teaches U.S. History at Michigan State University and lives with his family in East Lansing. “Peter Knupfer is one of those rare and wonderful fiddle players who can do it all,” says mandolin virtuoso Donald Stiernberg. “Peter always brings a joyful intensity to the session and elevates his fellow musicians.”

Kevin Gaugier’s (banjo, lead and harmony vocals) three decades of performing experience have taken him from the Eastern European shores of the Black Sea to the wilds of central Alaska (where a portable generator was required to power the sound system). Kevin has performed on mandolin, guitar, and banjo with several mid-Michigan bands through the years, including Sweetcorn, with whom he opened for country superstar Wynonna Judd before an audience of tens of thousands. He also recorded the theme song for the radio program “Grass Roots” which airs weekly on Kalamazoo’s WMUK. Kevin’s recent performances include appearances with world-class banjoists Tony Trischka, Janet Beazley, and Bill Evans. Alternating between tasteful, sensitive fills and dazzling improvisation, Kevin’s instrumental lead work is a fine complement to Detour’s creative sound.

Missy Armstrong (lead, harmony vocals, guitar) “I grew up being exposed to many kinds of music,” Missy recalls. “My dad really loved music, he didn’t officially sing or play anything but he could remember every lyric to almost any song and we would whistle constantly.” Country and gospel harmonies captivated her at an early age, so that she “grew up singing in our small country church whenever I could.” Then the bluegrass bug bit her and for a time she ran with her own outfit, the Missy Kay Band, before signing on with the Detour boys. Her greatest influences these days are Eva Cassidy, Etta James, Lynn Morris, Dorothy Moore, Anne Murray, Tony Rice, Bonnie Raitt, Dolly, EmmyLou, and Patty Loveless.