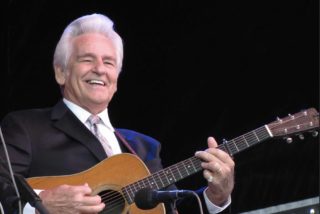 Performances from The Del McCoury Band, Greensky Bluegrass, Hot Rise, Billy Strings, Sam Bush, Marty Stuart, and more will be rebroadcast from past DelFests on May 21-24.

DelFest, the festival brainchild of Del McCoury and his extended McCoury family, has just announced DelFest At Home, a streaming event celebrating musical highlights from DelFests past. Happening during the originally scheduled festival weekend, May 21st through May 24th, the free online event will feature performances from the festival’s namesake and his family as well as bluegrass and jam band luminaries such as Trey Anastasio Band, Bela Fleck & Chris Thile, Greensky Bluegrass, and more. A full lineup can be found below. Donations collected throughout the weekend will go toward funding the DelFest Foundation, an organization that works with non-profit organizations such as Western Maryland Food Bank, Allegany Health Right, and Habitat for Humanity as well as others in and around Allegany County, home to DelFest for over a decade. Starting Thursday at 4:30 pm Eastern, fans can tune into Nugs.tv, DelFest’s youtube channel, or Facebook page.

We’ve heard from many folks how much it’s going to hurt not being at DelFest this Memorial Day weekend, so we hope this helps a little. We’re grateful to have a dedicated crew that has captured some great moments of DelFest through the years, and are looking forward to reliving some of these great moments with you ourselves –  Ronnie McCoury.

We are so excited about this. It’s just a small way we can all feel connected this weekend. Keep an eye on your notifications—we are going to pop onto Facebook Live from time to time between sets to say ‘hello – Rob McCoury.

Visit the Deafest Website for specific broadcast times and dates.

DelFest Foundation is a private foundation with a rich and exciting history built upon the music, values, and ideals of the legendary bluegrass musician, Del McCoury, and his family. Their mission is to nurture a strong community, raise awareness of social justice issues, and support a healthy environment. The organization seeks to raise awareness of the important social concerns that adversely affect the Allegany County Maryland communities and to donate funds that support projects of non-profit organizations that lead to the betterment of peoples’ lives. The Foundation takes an active role in affecting positive, lasting change in the community by supporting the following organizations: Western Maryland Food Bank, Legal Aid, Hot Stove League, Associated Charities, Allegany Health Right, Salvation Army, Jane’s Place, Family Crisis Resource Center, Allegany County Habitat for Humanity, Mission of Mercy, and Boy Scouts of America – Potomac District.

Founded in 1997 as a fan site for downloading live music, nugs.net has evolved into the leading source for official live music from some of the largest touring artists in the world. Metallica, Pearl Jam, Phish, Red Hot Chili Peppers, Bruce Springsteen, and many other artists distribute recordings of every concert they play through nugs.net. nugs.net’s platform includes downloads, CDs, webcasts, and subscription streaming services, delivering exclusive live content to millions of fans on a daily basis. Additionally, nugs.net founder Brad Serling hosts a weekly radio show on SiriusXM Jam On featuring the week in live music, cherry-picked from the nugs.net catalog.