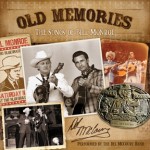 This year marks the 100th anniversary of Bill Monroe’s birth and there has already been a number of CD tributes to the Father of Bluegrass Music and no doubt others to follow. But when listeners turn to Old Memories: The Songs Of Bill Monroe–released digitally in September with a vinyl release to follow on 25th October, what they hear won’t be the result of a carefully crafted campaign, but the result of a decision that was as spontaneous as it was inevitable, because for Del McCoury, Bill Monroe’s legacy isn’t just a matter of history, but something that’s as immediate and personal as the guitar he picks up every time he gets ready to play. McCoury served a life-changing year with Monroe’s Blue Grass Boys from 1963 to early 1964.

I had done songs of his on different albums I made through the years, but I’d never really thought about doing a whole album until the day we were flying home from the Grammy awards, and by the time we got to Nashville, I’d made a pretty good list of what I wanted to do. I didn’t want to do a lot of things that everybody had already done; I wanted to do somethings that weren’t real popular but were really good. Some were songs I’d never heard him sing, some were songs that he’d sing on a show, and some were songs that he sang on the record, but he made me learn the lead. And I wanted to do them in the same keys he did, because if you change that, you just don’t have the same sound he had on them – Del McCoury.

The result is a CD that perfectly captures the essence of Bill Monroe’s music, and does it in a way that stands head and shoulders above the crowd. For when Del McCoury lifts his voice to sing “In Despair” or “Live And Let Live,” what comes out is what he learned to sing standing next to Monroe on stage, tempered by another few decades of bluegrass tradition; when he tackles a song like “Heavy Traffic Ahead,” he remembers his brother bringing that 78 RPM record home from the store when it was first released; and when he harmonizes with son Ronnie on the Monroe-Hank Williams gem, “I’m Blue, I’m Lonesome,” family and tradition blend perfectly as he sings the master’s part while Ronnie takes over the part Del used to sing himself with Monroe.

The Songs Of Bill Monroe is not just the tribute to Bill Monroe that it’s intended to be, but a tribute, too, to the newest member of the Bluegrass Hall of Fame—Del McCoury.