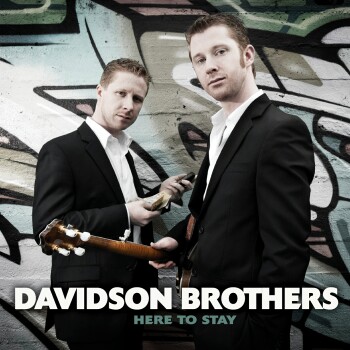 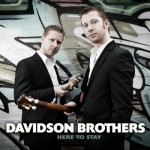 Australia’s hottest bluegrass act, the Davidson Brothers released their brand new album Here To Stay on the 1st July 2011. Here To Stay contains eleven original tracks, ten of them written by the Victorian based brothers Hamish and Lachlan.

The songs on this new album are old and new – steeped in bluegrass tradition – but with the patented Davidson Brothers energy. It’s Bluegrass, but it’s also New Grass. Check out the scorching 180 beat per minute banjo instrumental OMFG for a sample of what you will hear at a live gig.

We’ve managed to capture the energy of our live show on this record and it is our best yet –  Lachlan Davidson.

Sharing the lead vocals, the Davidson Brothers shine on banjo, fiddle and mandolin and are supported by some of their favourite Nashville session musicians on this release.

Other stand out tracks include My Heart Can’t Believe My Eyes which is a classic heartbreak story written in traditional bluegrass style. Write Me A Letter is a song about loneliness that addresses the lack of personal interaction in the age of technology. Victoria expresses home state pride and the Double Plugger Strut is a stompin’ mandolin tune influenced by Australian culture.

Finalists in the 2010 Melbourne Prize for Most Outstanding Musicians, the Davidson Brothers travelled to Nashville to work on their fourth project with producer Mark Thornton and this time joined by Larry Marrs as co-producer. Mark played guitar with Jerry Reed for twelve years and Larry is a talented Kentucky native and has toured with the likes of George Jones, Randy Travis and Marty Stuart.

With two Golden Guitar awards to their name and a handful of Australian Bluegrass Championship titles, Hamish and Lachlan are favourites at folk and country festivals nation-wide and have also appeared on Spicks and Specks, Carols By Candelight, CMAA Golden Guitar Awards and Bert Newton’s Good Morning Australia.

The Davidson Brothers aren’t yet 30 years old, but they have toured Europe taking the music they love to a whole new generation of music lovers and are highly regarded in the bluegrass scene in the US.

It has been an honour to be invited to perform back to back with bluegrass pioneers such as Ralph Stanley (Oh Brother Where Art Thou) and to play in the backyard at the boyhood home of Bill Monroe. For weeks afterward, you couldn’t have smacked the smiles off our faces with a baseball bat – Hamish.

The Davidson Brothers played on The Man From Snowy River soundtrack; represented Australia at the IBMA International Bluegrass Fanfest in the USA (2004 & 2009); and have toured with the likes of Lee Kernaghan and Troy Cassar-Daley who described them as “…the best young Bluegrass Pickers we have seen for a long while in Australia and a very exciting live act”.

Get the Davidson Brothers’ latest album Here to Stay at www.davidsonbrothersband.com and don’t miss their upcoming CD launch performances.