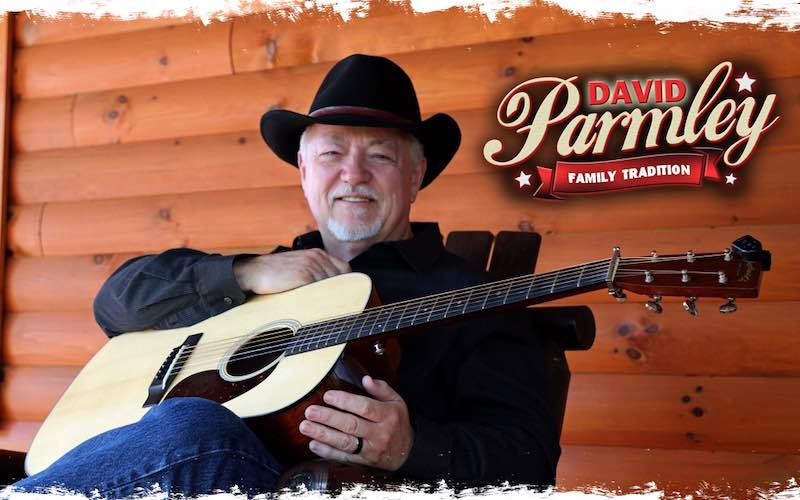 David Parmley left The Bluegrass Cardinals in the 90’s to pursue a solo career leaning more towards a modern approach to Bluegrass Music. David Parmley and Continental Divide topped the Bluegrass Charts throughout the 90’s and now Parmley is back and excited to be recording again and creating new music as well as keeping the family tradition alive.

Being back in the studio and making some great new music has been so much fun! I’m so excited to have signed with 615 Hideaway Records. I want to thank the label and Sammy Passamano 3 for this opportunity and am looking forward to a bright future with them – David Parmley.

Ask any bluegrass fan to list their top 5 singers and rhythm guitar players, and there’s a very strong likelihood David Parmley’s name will be on it. He is a masterful, nuanced, vocalist and interpreter of both traditional and contemporary bluegrass, and an industry mainstay for over 40 years.

David was born in southern California, February 1st, 1959, and raised on a musical diet of first-generation bluegrass. He developed an early interest in the artform and was singing perfect harmony parts by the age of 8. Under the guidance and encouragement of his father, journeyman banjoist, Don Parmley, David honed his skills, and co-founded his first professional band, the Bluegrass Cardinals, who released its first commercial recording, all before he was old enough to hold a valid driver’s license.

Musical talent in the extreme is often restless, needing room to grow, and so too was it for David. In the early 90’s David left the Cardinals to seek a new direction with wider commercial appeal yet retaining his musical heritage and roots. It took a couple of years to find the right combination, but when he did, David moved quickly to form Continental Divide, whose decidedly more contemporary debut project received rave reviews the moment it was released. During its successful 17-year run, Continental Divide released 8 additional projects, maintained a rigorous touring schedule, and acquired a legion of loyal fans.

However, in 2012, David felt it was time to take some extended time off to scale back, take a long look at changes within the industry and maybe, just maybe rechart a new course. To keep his chops up and scratch his musical itch, he formed David Parmley & Cardinal Tradition that toured more for fun than career. The covid pandemic put an abrupt end to that endeavor, as it did for everyone. The good news is that it gave David more time to reflect on where, or if he wanted his career to go when the shutdown ended.