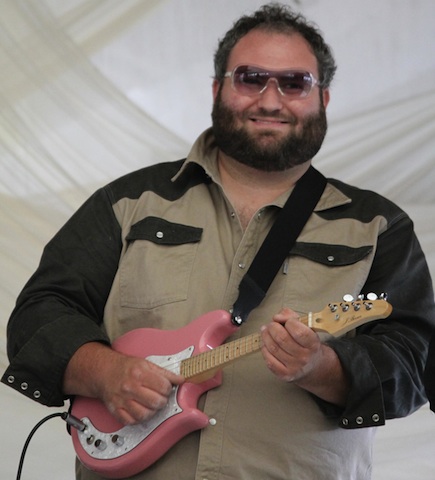 “It’s just my way of making people think,” says Nicholson, who used to design mandolins for the J Bovier company. “I call it my ‘Hello Kitty’ mandolin and it seemed appropriate for Breast Cancer Awareness Month.”

Nicholson surprised the audience at a recent Balsam Range show in Burnsville, North Carolina when he used the pink mandolin on One Way Out, a rock tune popularized by the Allman Brothers Band in the 1970’s.

When asked what Balsam Range fans thought of the electric mando and rock song, Nicholson chuckled and said, “We’ve played there so much, it’s like family, so I guess they let me get away with it. After all, it’s for a good cause.”

Balsam Range recently won the IBMA Award for Album of the Year for their CD Papertown which spent 5 consecutive months atop the Bluegrass Unlimited National Bluegrass Survey Chart.

For more on the band, visit www.balsamrange.com