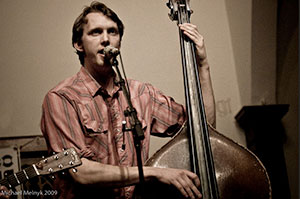 Bluegrass favorites Frank Solivan & Dirty Kitchen are excited to announce the addition of bass player Danny Booth to their band’s official lineup.  Booth, originally from Anchorage, AK has played with  Spring Creek from Colorado for over a year.  Prior to Spring Creek, he played with Kathy Kallick and his own band, 49 Special.  FS&DK asked him if he could fill in for a few weeks while Spring Creek was off and as a result of a job well done, FS&DK has offered him the position permanently.  Booth’s first show as an official member will be at the  Freight and Salvage in Berkeley, California on December 1st.

We are so excited to have such a powerhouse join the band. Danny is not only an incredible musician and singer, but a first-rate human being. I was only 18 years old when I moved to Alaska and started playing music with his dad Greg. Dan continually got better on the bass, guitar and mandolin. He even took a couple of mandolin lessons from me at one point. Only a teenager, Dan became proficient enough to start playing in the band his dad and I played in, Rank Strangers. I was fortunate enough to watch him grow into the professional musician he is today. I am thrilled and honored to have someone who is like family be in the band – Frank Solivan.

Hailing from the Chugach mountains near Anchorage, Alaska, Danny Booth grew up in a thriving bluegrass and country music family and community. His first”gig was at age 12 with Doug Dillard and Ginger Boatwright at a bluegrass camp concert. Heavily influenced by his father Greg, a master of pedal steel, Dobro and banjo, Danny soon graduated to join his dad in the seminal Alaskan bluegrass band, Rank Strangers. There he met an 18-year-old fiddler and mandolinist named Frank Solivan. To most people, growing up in Alaska doesn’t suggest a strong musical background, but they haven’t heard Dan or Frank.

My dad was never shy about telling me when something didn’t work. That gave me the perfectionist attitude I have today. I am thrilled to become a part of Frank’s band. I have known Frank since I was a kid back in Alaska, and to join him in his musical adventures is a dream come true. I am really looking forward to creating some amazing music with him, Mike and Lincoln.  I would also like to thank Spring Creek for their friendship and support over the last year and a half. They are all outstanding musicians and individuals, and it will be tough to leave them and beautiful Colorado. I wish them the best of luck in all their endeavors, music and otherwise.– Danny Booth.

In addition to Booth’s impeccable bass playing, he is a remarkable singer. He’s known for his powerful lead and seamlessly blended harmony vocals. “Working with Kathy Kallick taught me a lot about blending harmonies. Combining voices is like rubbing two sticks together – when done correctly it can catch on fire!” he says.

Danny has toured with the Kathy Kallick Band, 49 Special, Spring Creek, Bearfoot, and even performed with Dr. Ralph Stanley. He is the newest member of Frank Solivan and Dirty Kitchen and brings his own musical voice and vision to this rising band. Stand by to be blown away when Danny Booth gets up to the mic.