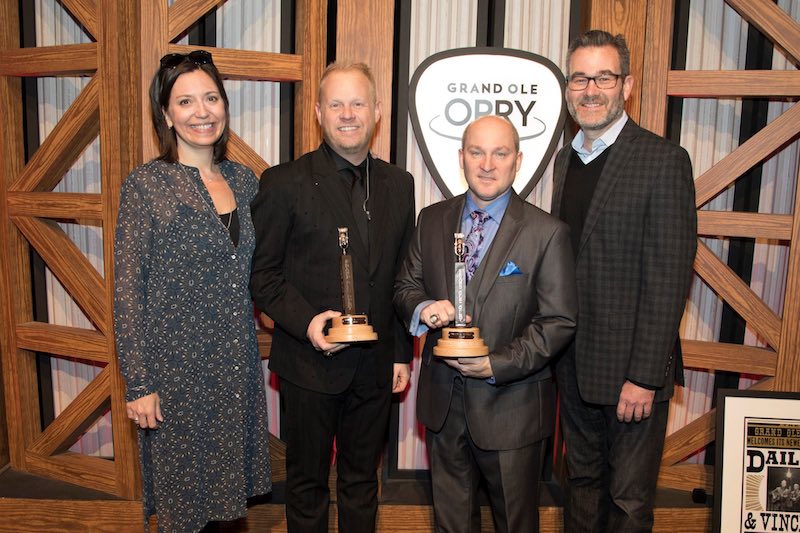 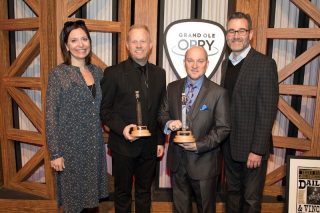 Multi-Grammy nominees and three-time International Bluegrass Music Association Entertainers of the Year Dailey and Vincent were formally inducted into the Grand Ole Opry last night by Opry members Old Crow Medicine Show and Jeannie Seely. The duo had been invited to join the Opry by Marty Stuart during their 100th Opry appearance in December.

Seely, who will celebrate 50 years of Opry membership later this year, presented an Opry Member Award to Jamie Dailey, while Old Crow lead singer Ketch Secor did the same for Darrin Vincent.

I had the honour of introducing Dailey & Vincent for their first Opry appearance. I thought to myself that night [that] I hope one day I get to see them become members of the Opry one day because they epitomise everything the Opry is on stage and off – Jeannie Seely.

They honour the traditions and respect their elders, but most of all they entertain. Tonight they join the ranks of country music’s greatest entertainers. Welcome Dailey & Vincent to the first family of country music – Ketch Secor.

We love the Grand Ole Opry. It’s in our DNA – Jamie Dailey.

Dailey and Vincent gave recognition to family, friends, their band, and members of their organisation who’d helped make the night possible. The duo closed their Opry segment with “I’ll Go To My Grave Loving You,” a hit by one of their musical heroes, The Statler Brothers.

We are very excited to welcome Dailey & Vincent into the fold. Jamie Dailey and Darrin Vincent have been proclaimed the best in their field across the board, winning awards and media acclaim for their songs, their musicianship, and their one-of-a-kind live performances. Over the past 10 years and more than 100 Opry visits, they’ve brought crowds to their feet both with country, bluegrass, and gospel standards as well as their brand new material. We look forward to Dailey & Vincent being active, beloved Opry members as the Opry looks toward the century mark and beyond – Sally Williams, Opry general manager.

About Dailey and Vincent:

Five-time Grammy award winners individually, three-time Grammy award nominees collectively, four-time Dove Award winners, and winners of 35 IBMA Awards altogether (including 3-time IBMA Entertainer of the Year Award winners and 3-Time Vocal Group of the Year Award winners), Jamie Dailey and Darrin Vincent, backed by one of the best bands on tour today, are some of the most reputable and elite entertainers in American music; bluegrass, traditional country and gospel music. The concoction of the fantastically instinctive vocal blends of Dailey’s tenor and Vincent’s reedy harmonies has gained them well-deserved praise for their own distinctive style and worldwide recognition as American Music gold. Dailey & Vincent has garnered world-wide attention with their first national, top-rated television series, “The Dailey & Vincent Show,” on RFD TV and over 500 airings of their PBS special “Dailey & Vincent ALIVE – In Concert.” Their most recent CD, Dailey & Vincent ALIVE, debuted at #1 on the Billboard Bluegrass charts and remained at the top position for over 15 weeks. For more information, visit daileyandvincent.com.