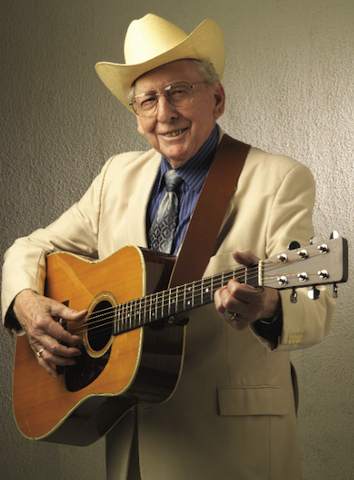 Curly Seckler, multi-instrumentalist and tenor singer was inducted into the Bluegrass Hall of Fame in 2004 as well as the North Carolina Music Hall of Fame. He is known for his work with several influential bluegrass acts including Flatt and Scruggs, Mac Wiseman, Jim and Jesse McReynolds and the Stanley Brothers.

Curly was the fourth of eight children, born John Ray Seckler in December 1919.  He inherited the nickname “Curly” as a young child where he was raised on a farm in China Grove, North Carolina. His parents were Calvin and Carrie Seckler.

Curly’s musical interests started as a child. He played in a band with his brothers as early as 1935, called the Yodeling Rangers. The band played a radio show on North Carolina radio. In 1939, Curly then met Charlie Monroe and was offered a spot singing harmony in the band then called Kentucky Partners.

In 1949, Curly joined the Foggy Mountain Boys with Lester Flatt with Earl Scruggs. Curly was part of the recording program playing on 130 songs for the band. These included, Roll in My Sweet Baby’s Arms, Salty Dog Blues  and I’ll Go Stepping Too.

Curly Seckler went on to co-write several songs including That Old Book of Mine and No Mother or Dad which were first recorded by Flatt and Scruggs. He’d then recorded his own solo album, Curly Seckler Sings Again, in 1971. Curly  and continued to record music long after his retirement in 1994. His final album, Bluegrass, Don’t You Know, was released in 2006.

Curly Seckler is one of the most beloved and revered of all the first generation country and bluegrass music pioneers – Marty Stuart, from Curly Seckler’s biography, Foggy Mountain Troubadour.