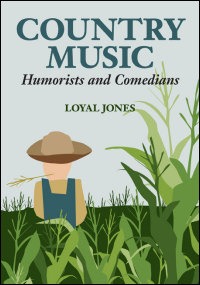 Jones created an exhaustive book of 448 pages detailing the mirth and music of country music humorists and comedians featuring 120 black & white photographs. “Mr. Jones is recognized as one of the true authorities on the humor and traditions of our region.” Franks said. “For twenty-three years he was director of the Appalachian Center at Berea College. It is such an honor to be recognized and included with so many of my comedic heroes such as Wendy Bagwell, Jerry Clower, Minnie Pearl and Doc, Tommy Scott and friends and contemporaries such as Jeff Foxworthy and Ron Thomason and so many more.”

Jones created an encyclopedia of performers in country music who have used comedy as a central component of their presentation. He offers a conversational and informative biographical sketch of each performer, often including a sample of the musician’s humor, a recording history, and amusing anecdotal tidbits.

Franks, who appeared as Officer Randy Goode on TV’s In the Heat of the Night (now airing on WGNAmerica) is an entertainer, actor and syndicated newspaper columnist. “t is so unique to be able to read some of the routines of these great performers and learn more about their day-to-day lives,” Franks said. “I have collected wonderful comedy material used by many of my comedic mentors; it is so wonderful to learn more about the origins of these great laughs.”

In an entertaining style, Jones covers performers throughout the twentieth century, from such early stars of vaudeville and radio barn dances as the Skillet Lickers to regulars on Hee Haw and the Grand Old Opry and even the Blue Collar Comedy Tour.

This comprehensive, readable reference opens with a broad introductory essay on country humor, discussing such topics as stock comic figures, venues for comedic performance, and benchmark performers. Throughout the volume, Jones places each performer squarely in the context of the country music community and its performing traditions.

“The importance of the subject emphasized by Jones is unquestionable,” said Bill C. Malone, author of Don’t Get Above Your Raisin‘: Country Music and the Southern Working Class. Humor has been an indispensable ingredient of country music entertainment and is in fact a major force in its worldwide success. This volume is insightful, informative, and entertaining.” Jones is the author of nine books and dozens of articles on Appalachian culture, including Laughter in Appalachia: A Festival of Southern Mountain Humor.