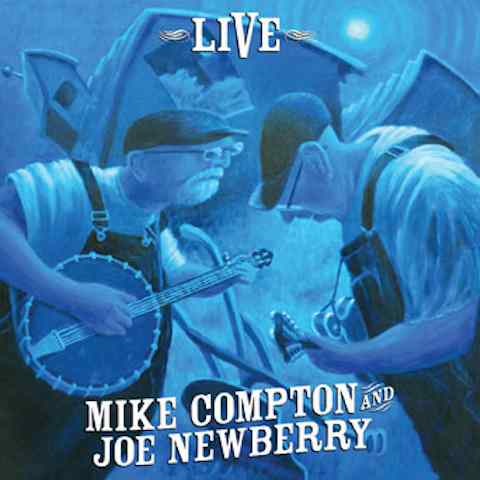 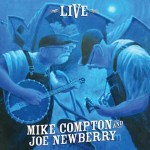 Tracks on the album include East Tennessee Blues, Righteous Pathway, Sittin’ On Top of the World, Lazy John, Rocky Road Blues, How Long Blues, Evening Prayer Blues, Kentucky Waltz, Rocky Island, I know Whose Tears, Raleigh and Spencer, and Fly Around My Pretty Lil’ Miss. This cd was recorded live at Brandywine Friends in Newark, Delaware, in February, 2012, using one microphone.

In their 2012 debut album, “Live”, Mike Compton and Joe Newberry mine one of the more neglected segments of country music history, that period during the ’30s and ’40’s when brother duet music was transforming into bluegrass. These two masters of the bedrock of old time music collaborate with a vision that’s both modern and ageless. Few are better equipped for the task with Newberry able to replicate the under-appreciated power of country rhythm guitar styles and open back banjo, and then mix in Compton’s master of the Monroe style of mandolin with their simpatico duet singing, and you have a two person string band that can effortlessly move from traditional songs to contemporary instrumentals, to ‘mother’ ballads, to original compositions—all with an ease that belies their intensity. It’s not about the number of notes with Compton and Newberry. it’s about telling the truth and paying homage to the song.

They pull off what’s almost impossible these days: honest, genuine music that will get your soul dancing – Chris Stuart, Bluegrass Today

Joe Newberry is one of my favorite songwriters and interpreters of the old songs. Mike Compton’s playing is part of my musical DNA. My earliest infatuation was with The Nashville Bluegrass Band and his mandolin rang out in my head as I tried to figure out how to make music with other pickers. When I learned two of my favorites had formed a duo I was very excited, but still not prepared for how good it would be. Mike Compton and Joe Newberry make music together. Lots of people play together, but few are able to make music. With only two voices and two instruments they can break your heart with one song and make you want to shout with joy on the next. Newly written songs sound ancient and their choice of covers seem somehow new. Their LIVE 2012 album is a must for lovers of real music. – Leigh Gibson, The Gibson Brothers.