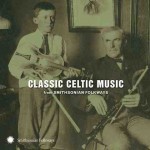 Given the origins of much of Bluegrass Music, I thought this album might be of interest to many. Besides that, Smithsonian Folkways have successful history of releasing musical gems in my experience.

The latest release in Smithsonian Folkways Classic series is, Classic Celtic Music. This release is due out on 26th February 2013 just in time for St Patrick’s Day.

Few genres carry such a rich and deep history as Celtic music, which reflects centuries of culture of the British Isles and Ireland as well as their North American inheritors. This month Smithsonian Folkways will release the 20th compilation in its Classic series, ‘Classic Celtic Music’ from Smithsonian Folkways.

Compiled by music historian and folklorist Richard Carlin, ‘‘Classic Celtic Music’’ delves into this diverse world of musical traditions, and is sure to delight both longtime fans of the genre and newcomers alike.

Carlin’s 23 selections span a wide spectrum of sounds from the Celtic regions, contrasting better-known early recordings with some of the best contemporary interpreters. Styles ranging from Sligo fiddle tunes to Northumbrian piping to sean-nós singing are represented in this enjoyable introduction to the Celtic music riches of the Smithsonian Folkways archives.

Some of the selections, like Margaret Dirrane’s “’Twas Early, Early in the Spring” and Joe Heaney’s “The Rocks of Bawn“, date to the mid-1950’s, while others were recorded in the latter part of the 20th century. The track list includes a hearty sample of field recordings as well as a previously unreleased tune, ‘Derry Hornpipe’, recorded at the 1983 Smithsonian Folklife Festival in Washington, DC.

As with every compilation in the Smithsonian Folkways Classic Series, ‘Classic Celtic Music’ explores the breadth and depth of a genre while the liner notes offer insight into the cultural and historical contexts of each selection. During the last 10 years, Smithsonian Folkways has released critically acclaimed “Classic” compilations of bluegrass, folk, blues, maritime, old-time, and mountain music, among others.