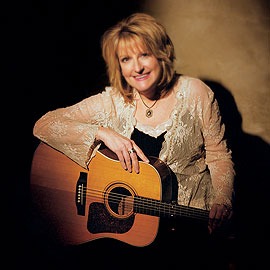 Claire Lynch, one of acoustic music’s most versatile singers, will release Whatcha Gonna Do on 8th September 2009.

A new Claire Lynch album does more than herald the arrival of a new collection of stellar vocals and tight, tasteful arrangements, each album also showcases Lynch’s remarkable taste in songs. Whatcha Gonna Do is no exception, it brims over with powerful songs, extraordinary vocals, and top-of-the-line musicianship.

Whatcha Gonna Do features four songs written or co-written by Lynch including Highway, written with Irene Kelley, Face to Face, written with Donna Ulisse, Widow’s Weeds, written with Jennifer Kimball, and the haunting Woods of Sipsey, which Lynch wrote for Granny, her grandmother-in-law, who taught her all about genteel Southern living. The album also includes Jesse Winchester’s That’s What Makes You Strong, delivered as a sultry duet between Lynch and the songwriter, the lovely A Canary’s Song, penned by Garth Brooks and Buddy Mondlock, and Bill Monroe’s classic My Florida Sunshine, which accentuates the blue in bluegrass.