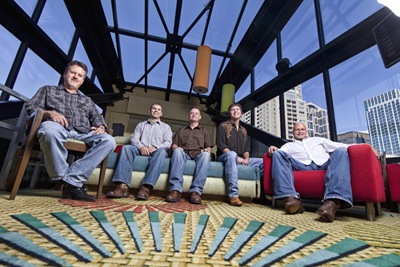 This retrospective collection includes  24 songs to be released in a series of three 8-song EPs – one for each decade of LRB’s existence.  The material will lean heavily on updated versions of many of the LRB’s most popular songs during each decade, reprised by the current LRB line-up.  Chronology, Volume One is now available for pre-orders on the band’s website.

Lonesome River Band has been in the news with many events lately including their new Strictly Country Magazine Spirit Award for Song of the Year for Record Time Machine (from their Still Learning album), plus Sammy Shelor’s 2012 SPBGMA Nomination for Banjo Performer of the Year.  Shelor also received the Steve Martin Prize for Excellence in Banjo and Bluegrass award that included an appearance and performance by Lonesome River Band and special guest Steve Martin on The Late Show with David Letterman last November.