Following the chart-topping success of 2012’s “Final Farewell,” the wry humor of “If That Was Love” and the broad comedy of their version of C. W. McCall’s tongue-twisting “Wolf Creek Pass,”  Chris Jones & The Night Drivers released a new single on 23rd July from the title track of their forthcoming Rebel Records release, “Lonely Comes Easy.” 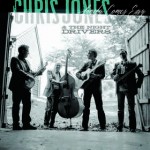 Available  at iTunes, Amazon and other online music stores, the single recast the song was written – and first recorded by Jones on his country-flavored Too Far Down The Road (2006) – in a bluegrass vein, sketching through telling details the portrait of a man and his not-so-swinging bachelor pad.  Instrumental work is provided by the Night Drivers, while IBMA Momentum Award Vocalist of the Year Emily Bankester joins Night Driver Mark Stoffel on harmonies.

The full Lonely Come Easy album, which features a rich trove of original material contributed by all of the Night Drivers, is slated for release on 27th August.  It’s the first in four years to feature almost all new songs, and follows the mostly retrospective  Lost Souls & Free Spirits: The Rebel Collection.

To hear and review the track, you can listen here.