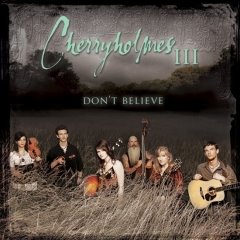 The new studio album from Cherryholmes, Cherryholmes 3: Don’t Believe, has now been released.

For those already familiar with this talented family, Cherryholmes III: Don’t Believe further displays their extraordinary charisma and unique sound that has set them apart. For the new listener, this album is a thorough depiction of a band that has flourished with each new work of art. For all, it is indicative of what we can expect in the future from a band that never ceases to amaze.

All six band members pull their creative ideas to form their own new brand of bluegrass music. Every member takes a turn singing lead and showcasing their abilities. Their live shows include twin fiddles, Irish step dancing, classic country yodeling, and old-time claw hammer in addition to their dynamic bluegrass.