Castlereagh by The Dear Orphans 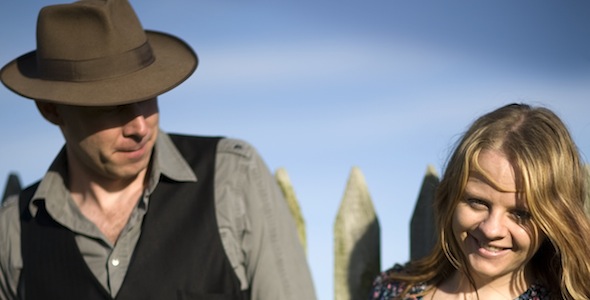 Sydney-based band Dear Orphans have released their first official music video for their song “Castlereagh” off their EP “Midnight at Annandale” featuring footage from Dorrigo Folk and Bluegrass Festival 2011.

Castlereagh is a suburb on the outskirts of Sydney Australia. It is one of five towns officially proclaimed by governor Lachlan Macquarie on December 6, 1810. He named it after the Secretary of State for the Colonies, Lord Viscount Castlereagh. He in turn was named after Castlereagh in Ireland.

This song was written by clawhammer banjo player Richard Galluzzi who frequently rides his bicycle through the bushland at Castlereagh. The track features Richard on clawhammer banjo, Carlyn Chen on fiddle, Nick Payne on acoustic guitar, Paul Sun on double bass and Lyn Taylor on hollers and hand claps.

You can listen to more music from Dear Orphans and their EP “Midnight at Annandale” on their website.

The video was directed by Lyn Taylor, edited by Nick Payne with colour grading by Kelly-Anne Gentle of Catacomb Creative.

Dear Orphans are a Sydney-based original alt-­bluegrass/old time music band that combine traditional bluegrass/old time music instrumentation and songwriting with folk and country elements to create a unique and intimate Australian form. Theirs songs cover traditional Australian theme such as stories about bushrangers as well as modern themes such as escaping the city on a roadtrip.

Featuring the songwriting of Lyn Taylor and Nick Payne, Dear Orphans’ music embraces the simplicity of life while connecting with the human condition. Also in the band are clawhammer banjo player Richard Galluzzi, Carlyn Chen on fiddle and Paul Sun on double bass.

…ultimately, though, what made this show special was the band’s connection to their songs and to the audience – Jolene: The Country Music Blog.
Dear Orphans have a distinctive bluegrass inﬂuence, writing songs about ‘cowboys and road trips’, as noted in the Illawarra Mercury. In between there are beautiful ballads about love, and stories of the everyday moments in life that become memories ingrained in your heart – Mem Davis of Mem Davis & The Kindred Spirits.