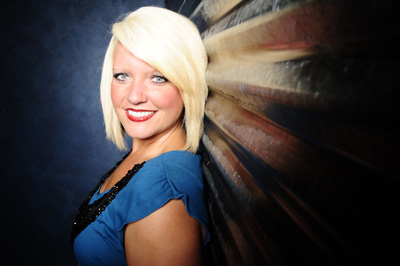 Multi-award winning vocalist Carrie Hassler takes off for a mini tour in Northern California next week. Her scheduled performances include the Freight and Salvage Coffeehouse in Berkeley on July 17, the Trinity Alps Performing Arts Center in Weaverville on July 18, and the Scott Valley Bluegrass Festival in Etna on 20th – 22nd July. Before heading to California, fans can see her perform this weekend at the Nine Mile Volunteer Fire Department’s Festival in Pikeville, Tenn. More details on each event including ticket information can be found at carriehassler.com.

As announced yesterday, Carrie appears in the Female Vocalist of the Year category on the second round International Bluegrass Music Association Awards ballot. Results from this ballot determine the final nominees for the 2013 IBMA Awards that are voted on by peers and colleagues in the bluegrass music industry. Winners will be announced at the organization’s convention in Raleigh, North Carolina this September. More information can be found at ibma.org.

Carrie’s impressive career includes three chart topping albums and numerous awards and recognitions in both Country and Bluegrass music. She has also recorded several very special duets – one with Michael Martin-Murphey on a remake of his mega hit song, “Wildfire” from his “Buckaroo Blue Grass II” album – along with the popular cover of Bob Seger’s “Turn the Page” with guest Josh Shilling (Mountain Heart) that appeared on her CHHR2 album.

During her California tour, Carrie will perform songs from her latest album, The Distance (Rural Rhythm) along with her numerous #1 hit songs. Several tracks from The Distance have topped the radio charts including the high energy version of Luxury Liner that recently reached #1 on the Sirius XM Radio Bluegrass Junction Most Played Tracks chart, spent numerous weeks on the Bluegrass Today Top 20 Songs chart and Power Source Magazine’s Top 35 Bluegrass Songs chart.

Carrie has appeared on two recent TV programs including the RFD-TV special, Bluegrass Comes to the Valley, part of Reno’s Old Time Music. She was also a Featured Artist on Rural Rhythm Records’ TV production, Behind The Dream™ on BlueHighways TV.

Carrie Hassler is sponsored by Moon Pie™ and French’s Shoes and Boots.  For more information and upcoming tour dates, please visit CarrieHassler.com and follow her on Twitter and Instagram.