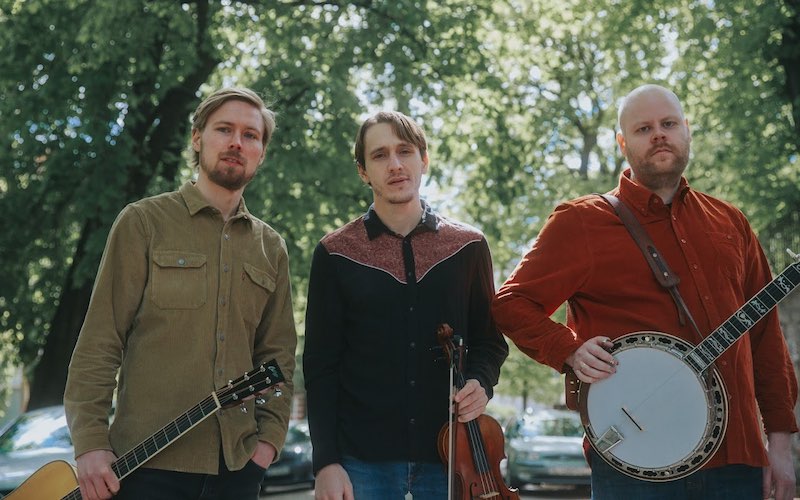 Oslo-based American-Norwegian trio Buster Sledge is newly signed with label Heilo and soon to release its first studio album Call Home in May 2022, following up on their self-recorded and self-released debut Spirit (2020).

Fiddle, banjo, guitar and three voices are the vehicle for lyrical storytelling against an orchestral backdrop anchored in the acoustic music traditions of the United States. Hailing from northern California, lead vocalist and songwriter Michael Barrett Donovan mixes themes from personal experience with folk and country music archetypes to breathe new life into time-tested song structures. Banjoist Mikael Jonassen and guitarist Jakob Folke Ossum both share a thorough appreciation for the fundamentals of bluegrass music, clear melodies and harmony-singing through the lens of being trained jazz musicians. In eleven tracks, Call Home tips its hat to artists such as Norman Blake, Punch Brothers, Tim O’Brien and John Hartford.

Buster Sledge was the first group to record in the recently recently opened Globus Studio of Sjur Lyseid (Little Hands of Asphalt) and his influence from behind the mixing board pushed the band into a slightly-augmented acoustic sound with more streamlined arrangements which is a suiting duet with the album art by William Hay that realizes a scene of a lone rider overlooking a large river-valley in impressionistic swaths of color.

Banjoist Mikael Jonassen, from Bodø in the far north, is Norway’s first higher-education certified banjo player. Despite beginning with an electric banjo and playing exclusively fusion jazz, Jonassen currently focuses his efforts on Scruggs style acoustic banjo via the playing of Béla Fleck and has taken several trips to the US to learn from the masters themselves. Jakob Folke Ossum, jazz-guitarist turned flat-picking aficionado, discovered the sound of acoustic flat-picking through Tony Rice and Bryan Sutton and meticulously taught himself from records and videos. Fiddler Michael Barrett Donovan made a living as a musician in New York City doing a master’s in classical composition while touring with a Grateful Dead tribute band. The three met in a comment section on a bluegrass forum after Donovan moved to Norway in 2019. The rest of the story you’ll have to ask them at a show sometime. Buster Sledge has been on stage in many small venues in southern Norway – don’t miss them the next time they come to town.

The members of Buster Sledge – From just above the arctic circle in Bodø, Norway to sunny Turlock in Central California – despite growing up in different cultures with an ocean between them have one important thing in common: a love for playing a wide array of American music.
In early September 2019, the three got together just to play some traditional bluegrass and welcome fiddler Michael Barrett Donovan to the country. After playing for a bit, Donovan suggested playing a song he had written (which would eventually be track #7 on the album, Square Peg). Rather than just stumbling through the tune and moving on, the three naturally began to work together to improve and arrange the tune, adding separate interlocking parts, vocal harmonies, and strategically laying out the form of the verses and choruses. Entirely not on purpose, Buster Sledge had just had its first rehearsal.

On banjo is Norwegian Mikael Jonassen who fell in love with the instrument from the first time he heard it – eventually becoming the first Norwegian to graduate from music college with banjo as his main instrument – but surprisingly played exclusively electric banjo in a jazz fusion band for the first few years.

The lead vocalist and fiddler is American Michael Barrett Donovan whose professional background includes driving buses and welding, an education in classical composition and playing with a touring Grateful Dead cover-band from NYC. And finally, on acoustic guitar, Norwegian Jakob Folke Ossum – whose childhood home was alive with Norwegian folk, Bob Dylan, and medieval vocal music – discovered and learned how to play bluegrass via recordings and videos while studying jazz guitar in college.

Buster Sledge’s thick vocal harmonies, hard-hitting instrumental lines and kaleidoscopic textures – all within the confines of having only three voices and three instruments – animate the songs of their debut album Spirit and expand the roles of their instruments beyond their conventional uses. Their all-original repertoire draws from their diverse backgrounds to blend genres from traditional to modern all while keeping the earnest lyrical story-telling of country and bluegrass music alive in the ambitious arrangements of their music.