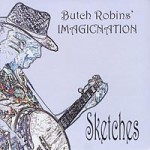 Those of us fortunate enough to see Butch Robins here in Australia a few years ago were treated to a wonderful series of performances and workshops. Butches CV remains as impressive as his playing. After a four year stint in Bill Monroe’s Blue Grass Boys in the 1970s, Butch went on to help form the New Grass Revival, played for Jim and Jesse, Leon Russell, Wayne Henderson and more.

But these days, Butch enjoys a new phase of his never-ending musical adventure as he is joins in music with Tom Ohmsen on mandolin, Kris Hodges on drums and percussion and John McBroom on bass and vocals to give us the band: Butch Robins’ Imagicnation. The album Sis named and musically fashioned after is seminal 1970’s Rounder Records release called Fragments of My Imagicnation.

In this album, Butch re-visits the fusion of bluegrass, funk, blues, jazz and rock which he helped pioneer in his New Grass era. Of the 14 tracks on the album most are originals written by Butch Robins.

You can hear samples of the whole album at the CD Baby website.