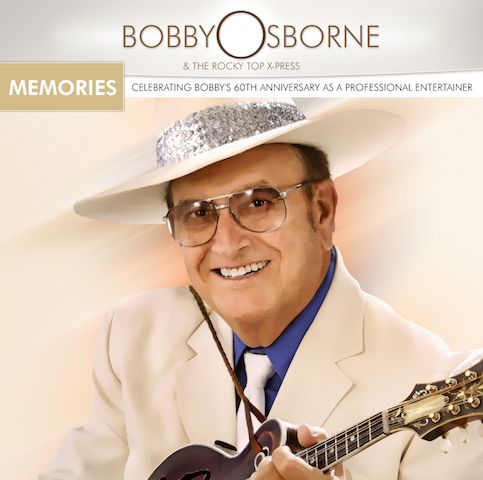 What a fitting tribute to Bobby Osborne’s 60th anniversary as a professional entertainer. In 1949, an 18-yr-old mandolinist from Hyden, Kentucky named Bobby Osborne started his pro musical career with banjo player Larry Richardson, Charlie and Ray Cline in a group called The Lonesome Pine Fiddlers. By 1953, Bobby and his banjo-playing brother, Sonny, were working with Jimmy Martin. With Red Allen singing lead, the Osborne Brothers formed their own band in 1955 and joined the Grand Ole Opry in 1964.

“Memories” has all the trademarks of the Osborne sound. There are Bobby’s tenor and high lead vocals, as well as his straightforward and personalized mandolin breaks based largely on single-line melodies, a styling he adopted after playing electric guitar and fiddle at an early age. As with other recent albums, Bobby continues to offer both new material with songs that have been around for decades. The latter include hits like Rocky Top, Ruby, Mountain Fever and With A Pain In My Heart. I’m surprised they didn’t also include “Kentucky,” the other state song recorded and made famous by The Osborne Brothers. Besides the typical bluegrass instruments, we also occasionally hear piano, keyboards, steel guitar, and even the fretless Japanese shamisen (courtesy of Takeharu Kunimoto)  bending its strings on one track, “Up This Hill and Down.”

While a CD jacket photo is included, the liner notes don’t clearly identify who Bobby’s “Rocky Top X-Press” band is, but credited musicians include Glen Duncan, Bobby Osborne Jr., Mike Toppins, Tim Graves, along with 1-2 tracks apiece featuring Patty Loveless, Russell Moore, David Grisman, Ronnie McCoury, Sammy Shelor, Audie Blaylock and David Harvey. It was apparently an oversight to not credit anyone for the prevalent drum tracks throughout the project, as well as bassman Daryl Moseley who is identified on Bobby’s website as a member of Rocky Top X-Press (since Dec 2001) and is also credited on this CD for writing “I’ve Seen It All.” Some research indicates that the drums were played by Harry Stinson. A highlight of the CD is Bobby’s duet with Patty Loveless on the title cut.   With no plans to retire, Bobby Osborne continues to cultivate his polished grassified country music. With sixty years of entertaining under his belt, his reputation and legacy only continue to grow.