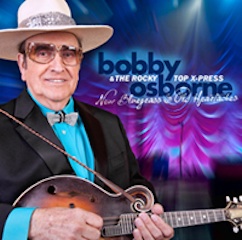 Josh Trivett and Peter Keiser with Moonstruck Management are proud to announce they have signed Grand Ole Opry star, Bobby Osborne for exclusive booking and management representation.  Moonstruck Management is a modern music management company that focuses on the country and bluegrass music business, incorporating artist development, management, growth, and booking into one controlled business.

Bobby Osborne recorded his first hit in 1949 and received his membership in The Grand Ole Opry in 1964. There is no doubt Bobby has been one of the most influential singers and mandolin players in the history of Bluegrass and Country music. He was inducted into the Kentucky Music Hall of Fame in 2002, inducted into the International Bluegrass Music Association’s Hall of Fame (Lonesome Pine Fiddlers) in 2009, and has recorded two State songs – “Rocky Top (Tennessee)” and “Kentucky” (Kentucky).

What an honor it was receiving news that the legendary Bobby Osborne was interested in working with us at Moonstruck! Bobby has been one of the great legends over the last several decades in the country and bluegrass worlds. His tenor singing is one of the most recognizable voices in the history of the music. We were thrilled to accept this opportunity to work with a Grand Ole Opry member and a legend – Josh Trivett.

He was the first person to craft a style not based on Monroe style mandolin playing. Bobby’s mandolin style reflected his love of the fiddle, and electric guitar playing of Hank Garland and Grady Martin. So what we see with Bobby Osborne, is a singer and instrumentalist who always saw himself as part of the County Music business. There was no separation between the styles, Bluegrass hadn’t yet become a genre unto itself, it was all just part of Country Music – Glen Duncan from the liner notes of the Bobby Osborne & The Rocky Top X-Press album Memories: Celebrating Bobby’s 60th Anniversary as a Professional Entertainer on Rural Rhythm Records.