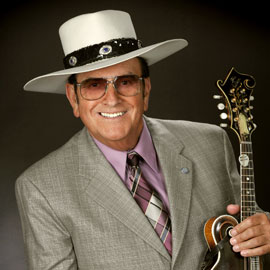 Bobby Osborne, legendary mandolinist and vocalist with the seminal bluegrass ensemble The Osborne Brothers, returns with his band The Rocky Top X-Press for the aptly titled Bluegrass & Beyond, January 20.

Bluegrass & Beyond is a sparkling collection featuring generous helpings of straight ahead bluegrass, gospel soul and traditional country, and includes bluegrass arrangements of some surprising material (The Eagles’ Girl from Yesterday, Eddie Rabbit’s Drivin’ My Life Away).

The album features guest appearances from Marty Stuart and Connie Smith on What Would You Give In Exchange For Your Soul, and Rhonda and Darrin Vincent on After the Fire Is Gone and solid support from The Rocky Top X-Press, Bluegrass & Beyond captures Osborne at the peak of his considerable powers.

The release of Bluegrass & Beyond is part of an exciting new journey for the 76-year old Osborne, who has enjoyed a remarkable fifty-year career with brother Sonny Osborne as the world-renowned Osborne Brothers. Bobby Osborne’s incomparable tenor, nimble mandolin playing, and unerring ear for fresh material and ingenious arrangements have put him among the most influential figures in the creation of contemporary bluegrass. Osborne received his first Grammy nomination as a solo artist in 2006 under the category of ‘Best Country Collaboration with Vocals’ for his duet with Rhonda Vincent on Midnight Angel from Vincent’s Rounder album, All American Bluegrass Girl.