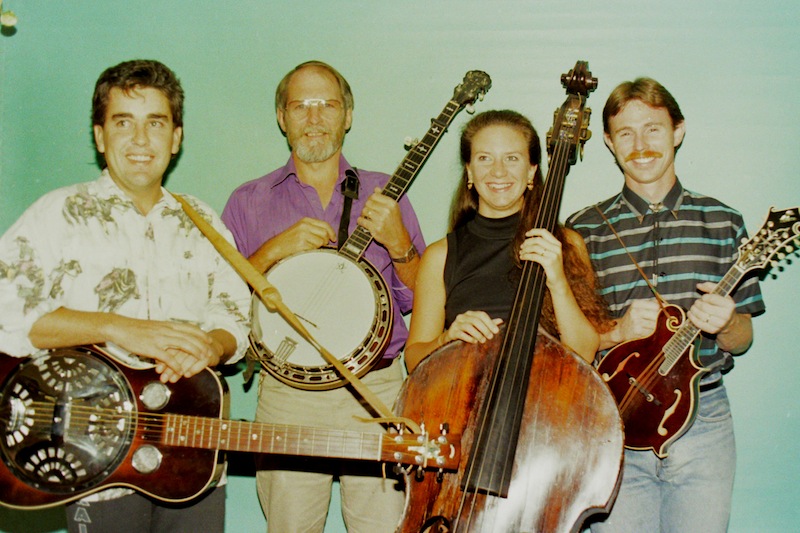 On 17th December this year Paul and Maria Duff held a huge celebration dinner for all past and present members of Bluegrass Parkway all of whom, over the last 25 years, have contributed to a wonderful musical experience.

Paul and Maria enjoyed the company of many of the past BGP members who attended and they only fell four short of a full contingent. Unfortunately Donal Baylor was unable to get there due to work commitments, Adam Gare was away and Dave Clarke had a gig, while Ted Critchfield, a founding member, lives in Lexington Kentucky.

Paul and Maria spent many hours creating a slide show of over 400 shots of the different lineups over the years so there was plenty to talk and laugh about when people arrived for the dinner. It’s safe to say that the majority of the humiliation was reserved for the earlier lineups. What were they thinking with that fashion, and the haircuts!

In all, eleven past and present members (and their partners) were in attendance leaving only four missing. There was much reminiscing and the night was capped off with a picking session which included a lot of material from the early lineups.

Next year, 2012, Bluegrass Parkway plan to present a special  25th Anniversary Concert in late January early February featuring previous lineups performing throughout the concert. Keep an eye on the Bluegrass Parkway website (and this site) for details.

One of the attached photos shows the original incarnation of Bluegrass Parkway circa 1987. Ross Coole, Ted Critchfield, Maria Duff and Paul Duff
The other pic shows all past and present members who were able to make it.