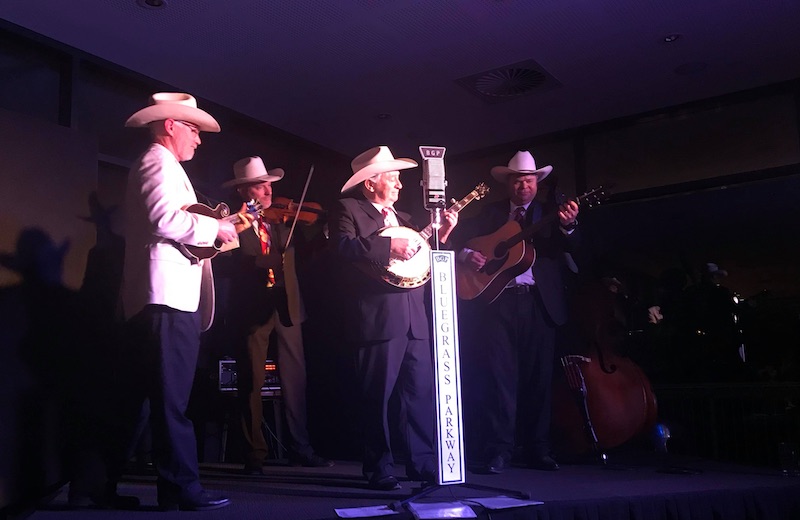 I first saw Bluegrass Parkway (BGP) at a festival in 1997 and they were one of the local bands responsible for fuelling my bluegrass addiction. Thankfully, 60 percent of them were on the stage on Saturday night at the Fremantle Park Sport and Community Centre. Original members, mandolin maestro Paul Duff was channelling his inner Colonel Sanders, donning a white jacket with beard to match. Lexington lovely Maria (“she can really belt it when she wants to, so look out”) Duff slapping the bass and Mick O’Neill letting his fingers do the talking on banjo. They were joined by Wayne Perry (also a member of City Slickers with local bluegrass legends Ian Simpson and Adam Gare) who, after 8½ years is off band probation. Their newest member is the sickeningly talented fiddler Michael Patrick (from The Company) who has made Perth home, lucky for us.

The show was the band’s first performance since pre COVID days and had the feel of a reunion, even though they hadn’t broken up. It was also the re-opening of the venue, a combination of three hundred-year-old clubs in a purpose-built club room, which had only been open for a month before the closures. 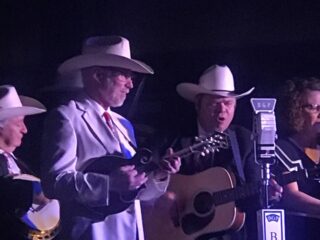 BGP kicked the night off with On and On to blow the cobwebs away and played two wonderful sets of a mixture of obscure bluegrass, gospel and old timey songs, with dazzling solos, a couple of Don Reno banjo tunes and some stunning harmonies, to an appreciative sell-out audience. They ended the night with a “first to finish” version of Born To Be With You, with Lexington Calls Me Back as an encore.

The band changed the style and pace of their music throughout the night, always leaving us wanting more and the between-song banter from charismatic Paul both entertained and educated the audience. I loved their use of the traditional single microphone, but it does mean that the banjo and the “bluegrass drive” sometimes gets lost in the front of house sound. Having said that, it was a fantastic return to live bluegrass music in the west and I can’t wait for more.