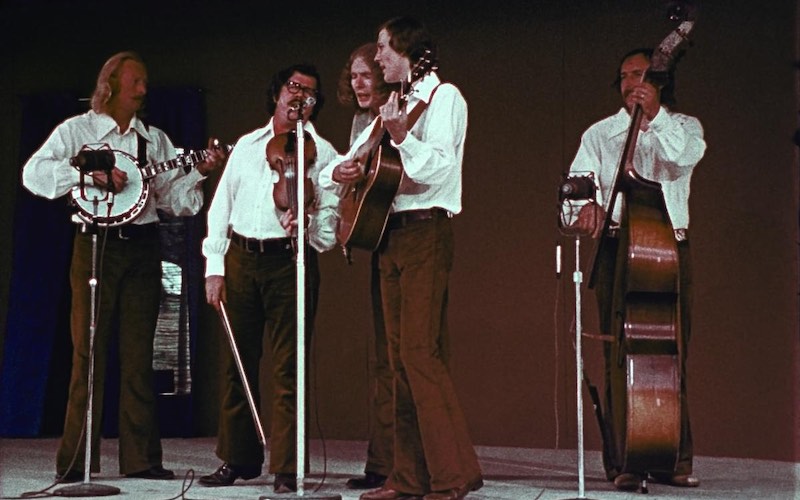 This Feature-length Documentary was Locally Financed, Produced, and Distributed.

A large crowd of bluegrass musicians and their fans gathered in the huge Virginia Theatre in Alexandria, VA on the evening of July 6, 1972. On stage, the popular DC group, The Country Gentlemen, and also The New Grass Revival, warmed up the SRO audience before the first screening of Bluegrass Country Soul. Over the next several weeks, the movie played in theatres across the DC, Maryland and Virginia area, and soon, up and down the east coast from Cambridge, MA, to Atlanta, GA.

The film foreshadowed two major changes in bluegrass music: the growth of its international appeal, as shown with the first US tour by the Bluegrass 45 from Japan, and the beginnings of “new grass,” as seen with the New Deal String Band, the Bluegrass Alliance, and others. 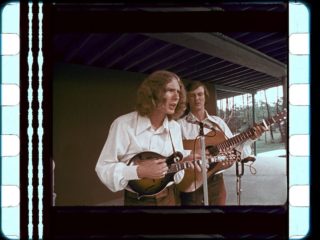 Many of the most notable pioneers of the music shared the stage with upcoming young artists who were leading the way to what would soon be called “New Grass:”

Looking back with the advantage of a half-century’s perspective, we can watch Bluegrass Country Soul to measure where bluegrass was, and where it is today.

Over the past half-century, Bluegrass Country Soul has introduced this acoustic style of string music to millions of new fans around the world. Clips from this movie have been incorporated in virtually every documentary about bluegrass history. 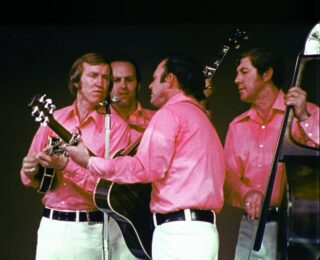 The movie was produced and directed by Albert Ihde with his Washington Film Group partners, Robert Henninger and Robert Leonard. Noted cinema verité filmmaker Robert Kaylor was the director of photography, and John Dildine recorded the sound. Bluegrass Country Soul was edited by Joel Jacobson and his assistant, Doug McCash.

Now, Ihde and his wife, Ellen Pasternack, have released a Golden Anniversary Edition of the newly restored film with “Special Features,” a 168-page, coffee table book with hundreds of color photos, and a 2-CD set with additional music from the festival stage. There are interviews with performers, a documentary about the making of the film, and behind-the-scene stories about the festival. The film was restored at Henninger Media Services, in Arlington, VA. This special edition is available for purchase at BluegrassCountrySoul.com.

Last year, at the Labor Day Bluegrass Festival in Camp Springs, NC, Cody and Donna Johnson put a 40-ft-wide screen up on their stage, where Bluegrass Country Soul had been filmed. The high-definition, digitally restored movie was screened for a large, appreciative audience, some of whom had been present during the filming fifty years earlier. Returning to perform were Bobby Osborne, then about to turn 90, and Doyle Lawson, who is shown in the film with the Country Gentlemen. Missy Raines, a multi-award-winning bluegrass bassist, performed with her group, Allegheny. She is seen in the film as a young girl wearing a purple dress.

Albert Ihde remembers the DC film scene in the early 1970s. “I studied Drama at the Catholic University of America, but I received my film education watching double-features of the classics at the Circle Theatre, owned by Ted and Jim Pedas. It was an incredible thrill for this 27-year-old filmmaker to show Bluegrass Country Soul at that popular theatre on Pennsylvania Avenue.”

Bluegrass Country Soul is now in the archive of the Bluegrass Music Hall of Fame & Museum in Owensboro, KY. You ca now a copy by visiting the Bluegrass Country Soul website where you’ll have the option to buy
the 3-Piece Collection – contains a Combo Pack (Blu-ray & standard DVD) plus Bonus Disc, the Companion Book, and Additional Music (2 CDs of performances from the stage, not heard in the movie). Items may be purchased individually also.