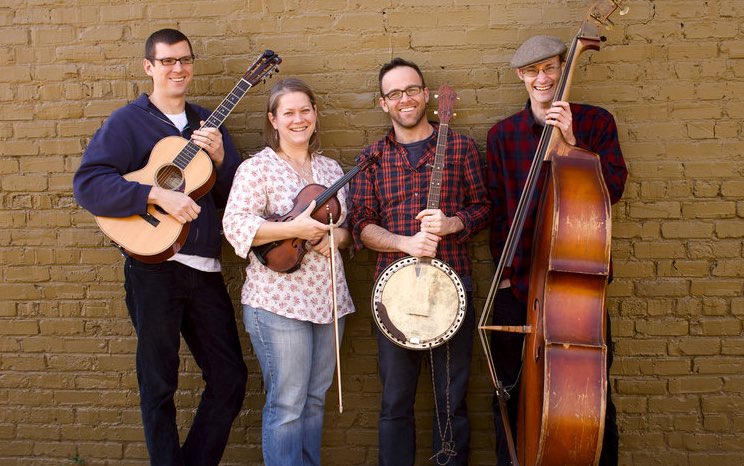 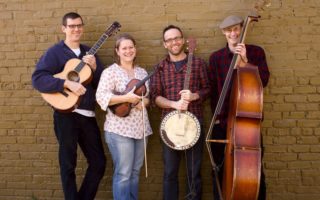 Start with some of the most hard-driving and blue ribbon winning younger old-time musicians on the scene. Add their time spent visiting and learning at the feet of older masters. Combine a love of tradition with a desire to create fresh, meaningful old-time music, and you get the Blue Ridge Broadcasters.

Comprised of some of the most inspiring, innovative, and engaging young musicians on the old-time scene, the Blue Ridge Broadcasters perform a mix of driving fiddle tunes and traditional songs. The members of the Broadcasters have been working together for over a decade, teaching, recording, performing, and competing. They have appeared together at The Appalachian Stringband Festival in Clifftop, West Virginia, winning multiple first place prizes in the traditional band and fiddle contests.

The Broadcasters build on their deep reverence for Appalachian old-time music to create compellingly new sounds. They can crank out blistering fiddle tunes made to move dancers or draw out the mystery from a crooked, haunting melody. They can tease out the funkiness from a country blues. They can blend their voices into sweet harmonies, breathing new life into old songs. Building on a decade of making music together at fiddlers conventions, in bands, and on the road, the Broadcasters have combined their skills as multi-instrumentalists to share their love and knowledge of old-time music of the American South and the people and places behind it.

Emily Schaad: Known for a complex and powerful fiddling style, Emily has taken first place in numerous stringband and fiddle contests, including the Appalachian Stringband Music Festival in Clifftop, WV. She came to the music of the southern Appalachians as a classical violist and public school string teacher, and once the archaic and driving sound of the fiddle and banjo found her, she never looked back. Originally from the Hudson Valley of New York State, she relocated to western North Carolina to study Appalachian culture and music at Appalachian State University. She was fortunate enough to spend time visiting with such old-time music greats as Clyde Davenport, Benton Flippen, Joe Thompson, and Chester MacMillian. From these seasoned musicians came a varied repertoire, a feel for Round Peak rhythm, and cherished stories and memories.

Joseph Decosimo: Raised in East Tennessee, Joseph keeps the musical traditions of his region alive. In his teens, he spent much of his time with the region’s older fiddlers and banjo players, learning their music and stories. His time with fiddlers Charlie Acuff, Clyde Davenport, and other local players profoundly shaped his sense of the music. Drawing inspiration from these encounters and from the region’s deep musical well, he injects new life into the old tunes. A sought after performer and teacher, he has shared his music at festivals, camps, and venues throughout the country and abroad. His fiddling and banjo playing have won blue ribbons at the most prestigious fiddle contests in the South, including the Appalachian Stringband Festival. He is a National Old Time Banjo Champion. He served on the faculty in ETSU’s Bluegrass, Old Time, and Country Music Studies Program. A trained folklorist, he is currently writing a dissertation on old time music.

Joe DeJarnette: Raised in Virginia’s piedmont and residing in the Blue Ridge, Joseph “Joebass” DeJarnette brings both rocksteady, driving bass playing and deep experience to the Mules. He has been playing and recording traditional American music for over a decade and knows how to draw audiences into performances of traditional music. As a founding member of The WIYOS, he toured the US, Canada and Europe. The only member of the band to have played dates on a Bob Dylan and Willie Nelson tour, he has connected with diverse audiences from stages at the Newport Folk Festival, to the Lincoln Center, to the Appalachian String Band Festival in West Virginia. Joe’s tasteful bass playing, musical acumen, and joyous stage presence put him in a category all his own. A veteran of festivals and camps, he directs the Augusta Heritage Center Old Time Music Week.

Doug Sharkey: Doug Sharkey was born in central Illinois, where he studied classical guitar and began teaching music full time. After playing in a variety of bands, he found old-time music and became obsessed with the haunting vocals and syncopated clawhammer banjo. He moved to Boone, North Carolina to study with the masters of the region and became immersed in the old-time scene. While in Boone, he earned his Master’s in Appalachian Studies from Appalachian State University. He performed for a variety of dances and concerts and eventually taught banjo and for the Junior Appalachian Musicians (JAM) program, an after school program that teaches traditional mountain music to young adults.