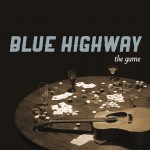 Rounder Records has told us that Blue Highway will release their new album, The Game, on 14th January, 2014.

This release will mark their twentieth anniversary as a working bluegrass band.  During their twenty years together, Blue Highway has maintained an unusually high level of excellence in their music, consistently turning out bluegrass that’s characteristically true to the principles of the genre while remaining both memorable and original.  Amazingly, the original personnel from the band (which formed in 1994) remains intact, a remarkable achievement in itself, given the frequent mixing and matching of personnel that is more the norm.

The album’s title cut, written by the multi-talented Shawn Lane, harks back to the very roots of bluegrass, and highlights the band’s knack for respecting the history of the genre while remaining forward looking. Another Shawn Lane composition, “All The Things You Do,” co-written with Shannon Slaughter, was inspired by the untimely death of the great Harley Allen.

A veteran of both Doyle Lawson’s and Ricky Skaggs’ bands, prized for his voice as well as his mandolin and fiddle virtuosity, Lane has been a key component of the Blue Highway sound, and has contributed many outstanding original songs to the band’s oeuvre.  Two more examples are “Where Jasmine Grows,” a co-write with Gerald Ellenburg, and the melancholy “Just To Have a Job,” the latter an example of Lane’s empathy for the working man, a theme that permeates his best work.

The band’s remarkable chemistry was, according to the individual band members, evident from the start, and accounts in large part for their longevity. From a somewhat haphazard beginning—the band initially formed primarily to play weekend gigs, but quickly grew into something else—they quickly developed into a powerful and popular group with a compelling, immediately recognizable sound.

An early product of East Tennessee State University’s famed bluegrass curriculum, guitarist Tim Stafford was (and is) an historian of the music in a very real sense. He brings that sensibility to every Blue Highway recording.  His amazingly fluid guitar style is much admired as well, as is his lead and harmony singing and songwriting chops. “Remind Me Of You,” a co-write with Craig Market, is a perfect example of the kind of modern bluegrass imagery of which Stafford is capable, and evidence of the mature lyricist he has become.

“A Change Of Faith In Tennessee,” a song written by Stafford and frequent collaborator Steve Gulley, is a remarkable evocation of the disillusionment of a love once so right now gone so wrong. Bassist, composer, and singer Wayne Taylor contributes an appropriately melancholy lead vocal on this tune.

“Church Bell Wedding Blues,” written by Stafford and Jon Weisberger, although taken at a jaunty clip, is a “happy” blues with a traditional feel.

“My Last Day In The Mine,” written by bandmates Stafford and Taylor, has the feel of a country classic, which it may well become.  The lyrics express the feelings elicited by the worst news every working man dreads. Unusually, the vocal here is rendered not by a band member, but by a young guest vocalist and band protégé, Trey Hensley.

The album’s last song, “Hicks’s Farewell,” is an example of the delving into the music’s past that Stafford’s music history training inspires from time to time. It is a shape note type hymn that Stafford has wanted the band to record for a long time, and is an inspired choice. Shawn Lane and Wayne Taylor’s vocal duet is truly haunting.

Rob Ickes has earned many accolades for his instrumental compositions over the years. His latest, this album’s rambunctious “Funny Farm,” highlights his instrumental prowess, and also showcases Lane’s fiddle and Jason Burleson’s banjo to great effect.

Jason Burleson’s musical sophistication is reflected in the many original tunes he has contributed to the band’s repertoire, a wonderful example of which is “Dogtown,”one of two instrumentals on the album.

In discussing the reasons why the band has lasted for twenty years, one is struck by the unanimity in the names mentioned as influences by band members.

Wayne Taylor, originally from Virginia and familiar early on with the traditional bluegrass sound, turned away from the music for a time. He was brought back after hearing the Seldom Scene, the band which first brought Rob Ickes’s role model Mike Auldridge to national prominence. Wayne Taylor says he tells the Seldom Scene’s Ben Eldridge that he is at least partially responsible for whatever he has become musically, when after eighteen years of driving a coal truck, he joined the fledgling Blue Highway. Taylor’s resonant lead voice is one of the wonders of the bluegrass world, the perfect instrument for expressing his own songs–including the driving “Talk Is Cheap” on this album–and his strong bass playing nails the band’s pulse in place.

Every member of the band expresses in one way or another the importance of having a band full of writers. “The original material is a huge asset for the group,” says Stafford, “and it is always fun to come together and see what everyone has. I do enjoy those times. There has never been a bluegrass band with this many writers and singers that does mostly all original material, so it’s special.”