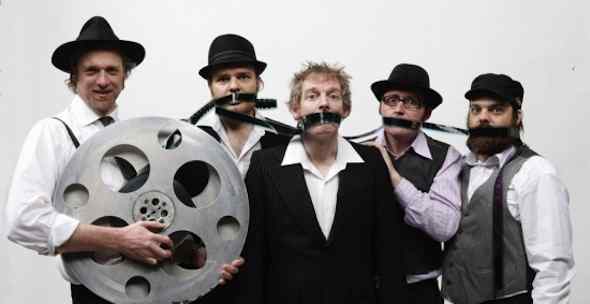 Making their eagerly anticipated return, Blue Grassy Knoll and Buster Keaton return with the brilliance of silent film and laughter at the Melbourne Recital Centre on Friday November 23rd at 7:30pm.

Regular five star hits of the Edinburgh Festival, Blue Grassy Knoll are one of Australia’s most loved gypsy-bluegrass ensembles, with their cross-over from music to live film score. Playing their own film score composition to four short films, Blue Grassy Knoll’s charismatic presentation breaks down the barriers between audience and film, engaging the audience in a most unexpected way.

This time they bring four short comedies by Buster Keaton. Presenting a brand new score to Keaton’s short film The Goat, it is a hilarious film of chance and mishap of mistaken identity in the form of a wanted poster, with memorable moments such as a distant speeding train approaching the camera and stopping with Buster sitting on the front of the train. This will be the world premier of a new score by Blue Grassy Knoll.

In addition they will play to The Playhouse, where the opening sequence features Buster Keaton playing every single role.  Beginning with Keaton attending a variety show, the film is set up as a series of humorous tricks on the audience, with constant doubling, and in which things are rarely what they at first seem to be.

Also on the bill is One Week in which Buster and co-star Sybil Seely are gifted a portable house that can be put together in one week. What follows over the next seven days is a hysterical episode of handyman horrors, including a housewarming that ends with their house spinning on it’s foundations like a merry-go-round. This classic Keaton short was the first made by his own studio in 1921

And finally to end the program the infamous Cops, One of Keaton’s most iconic and brilliantly-constructed short films, this very Kafka-esque film about a man fleeing from the entire New York police force has moments of sublime comedy rarely matched in cinema before or since. All of Keaton’s skill as an actor, stuntman and comedian are on display in this unforgettable comedy, and Blue Grassy Knoll’s musical score is at its best.