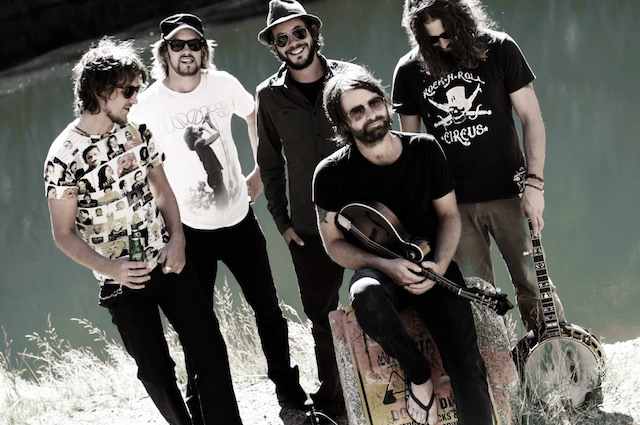 This is a new album from the Quarry Mountain Dead Rats, self-described as Obnoxious Bluegrass with a Rock ‘n’ Roll Spirit. I am not sure about the Rock ‘n’ Roll part but if you like your bluegrass fast and furious this is album kicks all the parts.

There is no shortage of musical talent in this line-up and all of the tunes result in compulsory foot tapping to the point of muscle strain. From the opening track “Take You Home”  to their rendition of the traditional “Mountain Dew” the album is full of surprises with a varierty of Old-Time and Bluegrass music delivered by what has to be one of the most energetic bands around.

This five piece band hails from Victoria’s Mornington Peninsula and includes Daniel Sudholz on banjo and harp;  Chris Wishman on mandolin; Lachlan Alcorn on guitar; Ben Clements on washboard, mallet, tambo, lagerphone, circular saw and other weapons of combat and Davin McDonald on double bass. The album was produced by Shane Nicholson, and recorded by Nicholson and Nash Chambers at Foggy Mountain in NSW.

Taking their music, commonly described as rockgrass, to the people, the band cut their teeth on Melbourne’s street corners and are working their way through the pub scene and festival circuit.  To date they have played or are booked to play The Falls Festival, St Kilda Festival, BLue Mountains Music Festival, Jamgrass and Cygnet Folk Festival.