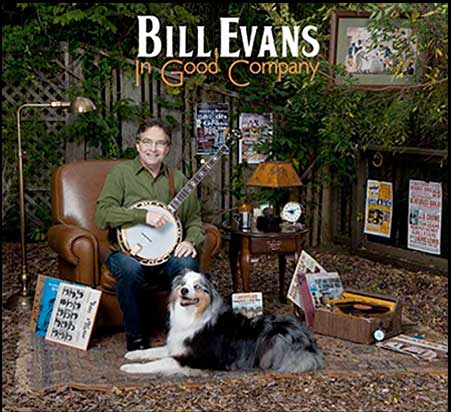 Bill Evans has alerted us to a new music video he has released on his website.

Bluegrass music videos are still a rare thing in the bluegrass scene, and Bill is keen to share with us his new music video for “The Distance Between Two Points,” a track from his new CD “In Good Company.”

The video was produced by Sarah Fisher at Blue Lotus Films Inc.

I was surprised at how little money it cost to come up with a project that most viewers think is pretty professional. It was a one camera shoot with a crew of four. We shot various scenes repeatedly from different perspectives to give the sense of a multi-camera filming. Sarah is a great editor and was able to make the most out of this method. The bottom line that I learned from this experience: like in movies, TV and fiction, you must have a good story line. That story line then generates the content – Bill Evans.

“The Distance Between Two Points” features Bill Evans on banjo, David Grier on guitar, Mike Marshall on mandolin, Todd Philips on bass and Tashina Clarridge, Tristan Clarridge and Darol Anger on fiddles. The track was produced by Darol Anger with production assistance from yours truly, Mike Marshall and Tom Size. It was recorded at Fantasy Studios, Berkeley in July 2011, engineered by Tom Size. The song was written by Bill Evans and Corey Evans, Bill’s 19-year-old daughter.

The CD “In Good Company” is currently #1 on the FOLK-DJ List charts. You can learn more about this project by visiting: http://www.billevansbanjo.com/in-good-company-cd44.php