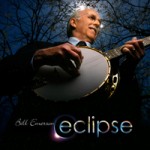 Rural Rhythm has announced the March 22, 2011 digital album release, Eclipse by Bill Emerson.  Called a Banjo Legend by the Washington Post. Bill Emerson is certainly one of the most influential musicians in bluegrass music and he certainly shines on this new instrumental project.  The physical album will be released 5th April 2011.

Last year Bill Emerson was honored by the DC Bluegrass Union when he was presented the first Washington Monument Award in recognition of his influential 50 year career in bluegrass music, and twice Awarded Banjo Player of the Year by Muleskinner News Bluegrass Magazine.

Bill tours with his band, Sweet Dixie and as a founding member of The Country Gentleman and the U.S. Navy Band’s Country Current, he has left his mark on the contemporary bluegrass scene – pushing country music’s most conservative genre in fresh directions.

Southern, Bill’s first album release on Rural Rhythm, was very popular with bluegrass radio and reached #1 on the Bluegrass Music Profiles Magazine (BMP) Top Album Chart, along with the single, “I Don’t Care Anymore” reaching #1 on the BMP Top 30 Hot Singles and as high as #5 on Bluegrass Unlimited Magazine’s Top 30 Singles.

Eclipse will be available from 22nd March, 2011 in digital formats on:  iTunes, Rhapsody, Amazon.com, and many more digital outlets.

Listen to some sample tracks from Eclipse