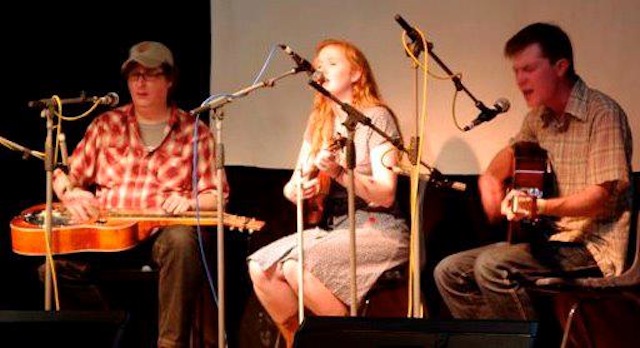 Jan Dale has let us know that the Big Bug Trio will be playing live to air on her radio show on Tuesday 24th July.

Big Bug Trio formed mid-2011, initially at the suggestion of Bridget Sommers of Dorrigo Bluegrass Festival, being an opportunity for some perpetual ‘sidekicks’ to take centre stage for a change.

Pete Fidler is well-known in the Melbourne bluegrass scene, being a sought-after Dobro player with many acts including Bluestone Junction and Nick Charles. Kat Mear on fiddle has been gracing the stage with acts like Gerry Hale’s Uncle Bill, Quarry Mountain Dead Rats and many more. Dan Watkins on guitar has toured extensively with the Davidson Brothers, and with Blue Mountains singer Karen Lynne.

The Big Bugs like to dabble in a mix of styles but spend most of their time in the middle ground between old-time and bluegrass. Expect southern-flavoured original songs, traditional tunes, sweet harmonies and precocious picking!  They recently released their debut CD.