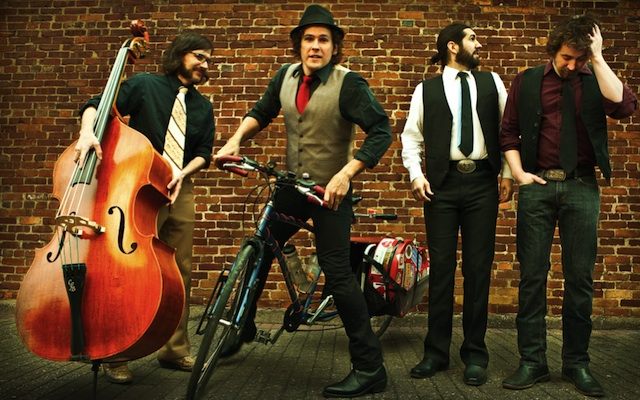 Here’s news of an unusual band from North America. The four members of the band, The Steel Wheels, will pedal by day and perform by night on their journey across USA’s Michigan and into Illinois and Indiana. Their tour begins at The Ark in Ann Arbor, Michigan, and continues west across the state before trading country miles for city congestion in Chicago. Following two performances in the Windy City, The Steel Wheels will end the tour with a celebration concert on 14th August in Goshen, Indiana. Dates and times for each show can be found at www.thesteelwheels.com.

The band comprises Trent Wagler on vocals, guitar and banjo; Jay Lapp on mandolin and guitar; Brian Dickel on bass and Eric Brubaker on fiddle.

“This is anything but touring as usual,” said Trent Wagler, lead vocalist and instrumentalist, who initiated the idea for the bicycle tours several years ago and recruited band mate Jay Lapp to establish the tradition of an annual bike-and-music tour. “We’re all about doing things simply and differently both in our music and in how we think about our work as professional musicians. Spokesongs is a way for us to do a band tour differently, since we’re essentially commuting to our jobs, and show how cycling is not only recreational but a totally viable option for all kinds of everyday transportation.”

It was in October 2009 that Wagler and Lapp launched out as The Steel Wheels Duo, climbing the mountains of Virginia to perform seven shows in seven days while logging more than 300 miles on their bicycles. They chronicled the experience in an article published in Bicycle Times (June 2010 issue); a short documentary is also available on the band’s web site.

The Steel Wheels have found support for their outside-of-the-ordinary tour from Tree Fort Bikes, now in its third year sponsoring Spokesongs, and are joined in generous sponsorship of the 2011 tour by Clif bar, Xtracycle, Colorado Case Company and Fretwell Bass and Acoustic Instruments.

An official Bike Blog on the band’s web site will chronicle the trip, and already contains new material about the unusual pre-tour preparation. In addition, a film crew will follow The Steel Wheels on their August bicycle odyssey to shoot footage for a documentary.

The Steel Wheels have also attracted plenty of attention on the Americana music scene. The independent band’s album Red Wing ranked in the Americana Music Association’s Top 100 Americana Albums of the Year in 2010, having spent 13 weeks on the AMA’s Top 40 radio charts, topping out at a 15th-place spot and, notably, finding its place as the second-highest ranked album of all independently produced releases. The album also cracked EuroAmericana Top 10 chart. Red Wing racked up five nominations in the Independent Music Awards, winning the “Best Country Song” category for “Nothing You Can’t Lose,” and was named “one of the best albums of the year” by Maverick magazine.

The Steel Wheels are an Americana band, rooted in musical styles that explore the territories between blues and bluegrass, old-time sing-alongs and foot-stompin’ fiddle tunes. They are subtle innovators who respect the past but whistle their own tunes, layering in rich textures and decidedly modern energy to forge a new sound.