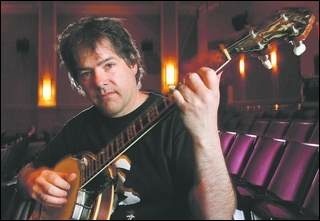 Béla Fleck  presented the world premiere of his Concerto for Banjo with the Nashville Symphony this month at Schermerhorn Symphony Centre. This is one of the first ever concertos written for the instrument.

Fleck played the piece on his vintage 1937 mahogany Gibson Mastertone banjo. The Concerto marks a significant new departure for Fleck, who called the piece a liberating experience for his efforts as a composer and hopefully for the banjo as well. Commissioned by the Nashville Symphony, the Concerto for Banjo will be the centerpiece of the orchestra’s opening concerts in the 2011/12 SunTrust Classical Series.

Having launched a prolific and wildly successful career as a genre-melding instrumentalist, first with the New Grass Revival and later with the Flecktones, he made the classical connection with his 2001 solo album Perpetual Motion. Released on Sony Classical, the recording went on to win a two Grammy Awards, including Best Classical Crossover Album. Fleck has won a total of 14 Grammys, and, with 30 nominations, he has been nominated in more different categories than anyone in Grammy history.

Fleck dedicates his new Concerto to pioneering banjoist Earl Scruggs, who first inspired him to take up the instrument. The composer says that the piece reflects the dual influences of classical music and bluegrass. “You can hear an evolution in my writing of the piece as it goes on,” he observes, noting that he wanted to “explore the new possibilities of the banjo as a member or the orchestra, while respecting its roots in bluegrass and jazz.”

The Concerto for Banjo is perfectly matched at the Nashville Symphony concerts with Aaron Copland’s famous Appalachian Spring, which celebrates the American spirit with music of breathtaking beauty and directness. Concluding the performance was Tchaikovsky’s larger-than-life Fourth Symphony, the Russian composer’s favorite piece, which sweept the audience with an emotional palette that ranged from melancholy to exuberance. The performance was webcast live via the Nashville Symphony’s website.