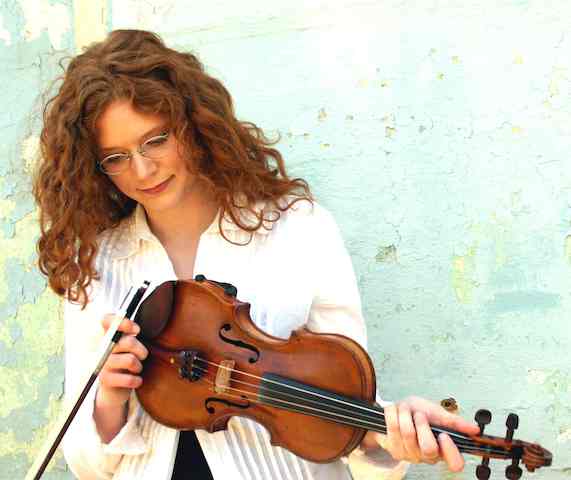 Becky Buller has announced her decision to end her long ten-year association with Valerie Smith and Liberty Pike this week.

Becky is one amazing fiddle player and multi-instrumentalist and also an excellent vocalist. I have the pleasure of hearing her perform on the banks of the Ohio River some years ago as she played the Appalachian Festival in Cincinnati.  I am certain we can expect great things from this very talented lady.

From her webpage we learn that Becky started fiddle lessons at age 10. Her parents enrolled her in Suzuki method violin classes and she was soon involved in the Mankato Area Youth Symphony (MAYSO) as well as her own high school band as a percussionist, jazz band as the electric bassist, choir and show choir.  By age 13, Becky was also a permanent member of Prairie Grass band and began trying her luck on the fiddle contest circuit.  In 1996 she became the Minnesota Junior Fiddling Champion in Cotton, Minn.  That same year she was selected to take part in the Minnesota All-State Orchestra.  Among her many fiddling influences, Becky is quick to point out Stuart Duncan, Alison Krauss, Eddie Stubbs and Jason Carter.

Becky began trying her hand at songwriting while still in high school, completing her first compositions while bagging clothes at her parents’ shop. In 1996, she won first place in the Hank Williams Songwriting Contest held in Avoca, Iowa. Becky was invited to be a part of the International Bluegrass Music Association’s (IBMA) Songwriter Showcase during their 1998 World of Bluegrass Week in Louisville, Kentucky.

In 2001, she was awarded the first-place prize in the bluegrass category of the prestigious Chris Austin Songwriting Contest at MerleFest in Wilksboro, N.C.  Her songwriting heroes include Gillian Welch, Paul Simon, James Taylor, Darrell Scott and Patty Griffin.

In May of 2001, Becky graduated from East Tennessee State University (ETSU) in Johnson City, Tenn., with a degree in public relations.  Throughout her four years at ETSU, she was an active member of the Bluegrass and Country Music Program and joined Valerie Smith and Liberty Pike.

The decision to leave Valerie Smith & Liberty Pike after ten years was a difficult one and I’m so grateful to Val for being supportive of my need to branch out. She and I will still do some projects together and will always remain friends.At the moment, I’m doing a lot of teaching, songwriting, sessions, and fill-in work as well as co-hosting “The Bluegrass Crossroads Show” on WMSR in Manchester, Tenn. I’ve just signed on to teach fiddle at the Sore Fingers Week 2012 in the UK next April. I’m really excited to see what else God has for me to get into – Becky Buller.

After 10 years of work, high-quality service, Becky is going to pursuing other dreams that she needs to strive for. This was a hard decision for both of us, for we are very good friends. Becky will be growing in studio work, song writing and many other goals. Please give support, for this is s big step in the direction of life and career. Will we play again? I understand that we will, for we enjoy each other so much. I do have an artist that we have trained for 2 years and only pray that you will help her grow by reaching out to her – Valerie Smith.