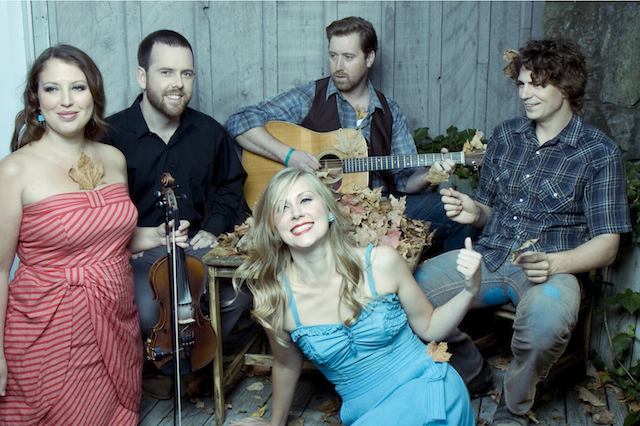 Here’s some news from Compass Records:

Call it new-timey, post-bluegrass, or string band music for the 21st century; whatever the name, there’s a revolution under way where string band traditions are meeting youthful creativity.

Look right to its center and that’s where you’ll find Bearfoot. The quintet, originally formed in Alaska, has become festival favorites with 4 strong releases, including their 2009 Compass Records debut, Doors And Windows which instantly hit the top of Billboard Magazine’s Bluegrass Album chart. Now, in the next phase of their career, this Nashville-based five-some has taken its place among the best and brightest of a new generation of musicians reshaping American roots music.

On American Story, the band’s sound is solidified with the addition of lead vocalist and songwriter Nora Jane Struthers and new band members Todd Grebe on guitar and PJ George on bass. Struthers’ vocals and clear eyed songwriting sensibilities give the band’s new sound a neo-traditional edge recalling artists like Gillian Welch and Tim O’Brien. Coupled with the instrumental prowess and vocal harmonies of longtime members Angela Oudean on fiddle) and Jason Norris on mandolin, the new Bearfoot is reminiscent of Nickel Creek one moment and early Dixie Chicks the next (both groups with whom they share the title of former Telluride Bluegrass Band Champions).
Standout tracks on the American Story album include the catchy and inspiring Feel Free, the evocative The Dust and the cajun-inspired Come Get Your Lonesome. The album release date is set for 27th September this year.

With a sound that is at once collaborative, uplifting, energetic, haunting, beautiful and inspired, Bearfoot is a band in its prime, on top of a cultural mountain where they honor the past and present of American string band music, all while shaping its future.

As an exclusive preview of the new album, the band is offering a free download of the track When You’re Away.