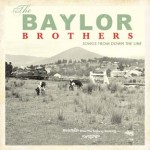 The Baylor Brothers have announced their new album Songs from Down the Line, to be released at the 2011 National Folk Festival.

Andy, Donal and Peter Baylor hardly need an introduction to enthusiasts of authentic roots music in Australia.  Whether separately or together, they have tirelessly plied their trade over more than 30 years and have a well earned reputation for their dedication and skills.

It’s been a while since the brothers released their acclaimed and influential Front Porch Favourites album. Now they have returned with a stunning collection of material for this new project Never likely to trot out hackneyed standards or present a caricature of the music they love; the songs on this CD represent the full gamut of their incredibly varied musical background. From traditional old time fiddle tunes to classic brother duet harmony to Cajun to hot western swing, they draw on their unmatched experience to pull it all together.

Each of the Baylor brothers have drawn deep from their archives and added great original songs to effortlessly create a unique sound.

To the brothers, making music comes as naturally as breathing – The Melbourne Age.

The Down the Line from the title refers to a unique saying from their beloved hometown of Healesville, Victoria where they began their musical journey.  It means towards the city and while that’s where the boys all headed, it was at the family home in Healesville where they practiced for hours and jammed together learning the fundamentals that have held on for so long.

Songs from Down the Line is an 18 song collection that will surely prove timeless. It was superbly recorded live by Steve Fraser over two days in February 2011 in a Brunswick studio created from a disused lingerie factory. The recording captures the brothers at their best and features their extensive collections of vintage instruments.  As before, the brothers are ably assisted by Andrew Scott playing double bass.

A note from their Dancehall Racketeers colleague and musicologist Rick Dempster:

Years past from Healesville they wandered afar.
Rockin’ and rollin’ in late night bars.
By rhythm and blues, led into temptation
The devils music and jazz syncopation
But see! they return to the straight and narra’
Washed clean by the waters of Ol’ Dad Yarra
Inspired by the hills and the stars up above
Warmed by the hearth of brotherly love.

A truly lovely album of heartfelt, authentic country, as only the Baylors can do it.