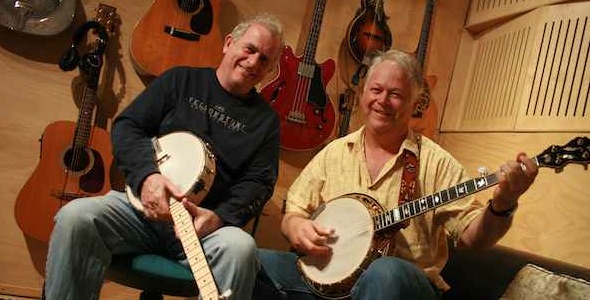 Banjo Australis Under the Milky Way – by Ian Simpson and John Kane 2013.

In 2010 Ian Simpson and his pickin’ pal John Kane released a superb album entitled “The Banjo; Misunderstood Maligned Magic.” It consisted of 20 of the all-time great 5-string banjo instrumentals. (If you are a banjo player and don’t have this album yet, do yourself a favour and get it.) In September this year Simpson and Kane released a second album, taking that uniquely American instrument and applying it to a uniquely Australian repertoire. And the result is, simply fabulous.

As the album’s liner notes state, the banjo has featured prominently in Australian music over the decades, including being heard in the music of Slim Dusty, The Seekers and of course the iconic Skippy theme. However Ian and John have broadened their choice of Aussie material far beyond folk music to include such songs as Under the Milky Way (The Church), She’s My Baby (Johnny O’Keefe), I’ve been Everwhere (composed by Geoff Mack made famous by Lucky Starr) and the Easybeats classic Friday On My Mind.

The result is an album of diverse tunes and styles, all of which sound like they were composed with the banjo in mind! Ian Simpson is arguably Australia’s finest banjo player specialising in 3 finger style, and John Kane, is an excellent guitarist, mandolinist and a very fine clawhammer player. The 2 banjo styles blend beautifully on the album, with Ian also contributing guitar and double bass, and John adding guitar, mandolin and ukulele.

The music ranges from gentle, poignant melodies right through to rip-roaring ‘blow your hat in the creek’ double time picking. It includes jazz, country and Celtic influences as well. The album is a complete package that captures both the best of the banjo and of Australiana. Sometimes people say of the banjo that they can’t hear the melody. The delightful thing about this album is how Simpson and Kane pull out the melody so well in each song making the music instantly recognisable and accessible.  The arrangements are beautifully constructed, tasteful, often understated and played with flawless virtuosity. And the recording quality, mixing and mastering of this album is superb.

There are so many highlights on the album it is hard to name just a couple. It opens with a beautiful rendition of Waltzing Matilda that will stir your soul, then there’s the Slim Dusty and The Seekers Medley that will have you smiling and singing along. There is a standout TV theme medley, which includes Skippy , The theme from Rush, and  Home Among The Gum Trees. There are also 2 evocative original tunes composed by Ian and John for this album, Snowy River Ride and Kangaroo Valley Ramble that capture the Australian feel. Other tunes include The Dying Stockman, Kookaburra Sits In The Old Gum Tree, The Road To Gundagai and the traditional Country Gardens.

One of the main reasons why we chose the Australian music for this album is to help bring the banjo to a broader audience. I believe Banjo Australis will do just that as its appeal is so broad – Ian Simpson.

This album is guaranteed to keep you smiling, tapping your toe and humming tunes all the day long. It will make a great Christmas gift to your friends and family who perhaps are not yet convinced the banjo is the greatest instrument ever made!