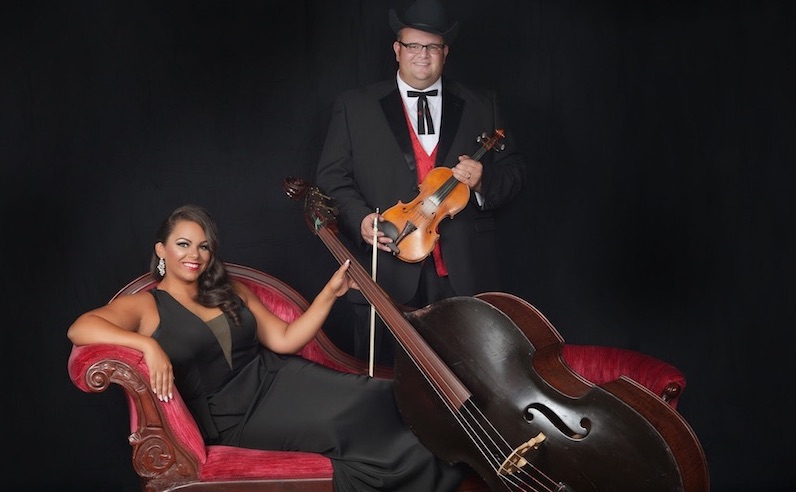 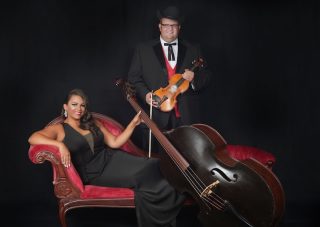 Dewey Brown has played the fiddle from the age of 9 years old. He was a Clinch Mountain Boy for Dr. Ralph Stanley for 11 years, until Dr. Stanley’s death in 2016. He started his career playing with the band Blue Ridge while still in high school. Since then, Dewey has played with artists such as Honi Denton, Charlie Waller & the Country Gentlemen and on occasion, IIIrd Time Out.

Leslie Brown was raised in the Appalachian Mountains, in the coal mining town of Vansant, Virginia. Raised by her grandparents, bluegrass music has always been a mainstay in her household. Her father, Virgle Vandyke, was in a family band ensuring that mountain music was in her blood. At the young age of 7yrs old, Leslie began clogging at local bluegrass festivals, shortly after she joined a square dancing group and traveled the east becoming a well-known clogger in the bluegrass world. She has a Bachelor of Science in Nursing and has been a nurse for 14 years. Her upbringing in the Appalachian Mountains plays a major role in her song writing, playing and singing.

With the release of their album Under The Mountain this week I was able to interview Dewey and Leslie to find out some more of their origins, their inspirations and motivations:

Music is obviously a major part of your lives and reading your biography this week, I am interested to know what would you consider were the major influences from your parents?

Leslie: “For me, my life revolved around bluegrass. We went to a different bluegrass festival every weekend as a family, my grandparents raised me and they loved bluegrass! We were part of a traveling square dancing group and I was a clogger, and any music that was ever played in the house was bluegrass, my daddy (grandpa) said ‘If it ain’t bluegrass, it ain’t music!'”

Dewey: “My dad took me to bluegrass festivals and fiddlers conventions growing up as well, he played the bass and I owe all my accomplishments as a musician to him.”

In your bio you cite a number of folks you have played with over the years. Who would you say has had the most significant effect on your creative process as a musician?

Dewey: “I have played with some mighty fine musicians and people, but the most significant being the late great Dr. Ralph Stanley. He taught me so much, his way of singing and playing was unlike any other, he personally took time to help me transform into the musician I am today and I will forever be grateful.”

How did the two of you team up musically. How and where did that happen?

Dewey: “Well, its kind of a meant to be type of thing, Leslie helped me on my second solo album while I was with Ralph, she helped me write some of the songs and even one Dr. Ralph recorded later on one of his albums, so I knew she had a way with words however I did not know she could do what she is doing now. She started playing the bass and writing all of this awesome original music and I just knew there was something there, and now we can share this journey together.”

Your new album features the song “Those Old Mountains” which is to be released soon if not already. Where did that song come from and what inspired you to record it?

Leslie: “I am from Virginia, way back in the mountains, and when I married Dewey, I moved to North Carolina, very different from where I’m from. I have been homesick since I left home and one day I was driving back from a visit, and it just came to me as I was thinking about my daddy working in the mines and my mom reading the bible each night. The song is a true story and really tells where I came from and how much I miss the mountains, home.”

I can’t image anything more difficult when planning an album than to have to sort through what songs/tunes will and what will not be included Perhaps tells us about the song selection process in planning for this new record.

Dewey: “It is challenging but my main goal with this record was to showcase new, original material. My wife, Leslie, had that all packaged up for me so that wasn’t as hard. 12 out of 14 songs on the album are all-original, but the 2 that are not, ‘Pretty Polly’ and ‘Black Lung’ were just songs that we both love and have meaning to us. I played and sang Pretty Polly with Dr. Ralph many times on stage so that is, in a way, our tribute to him and Black Lung written and sung by Hazel Dickens was just a good old-time a-capella that struck a heart string with my wife because her daddy suffers from Black Lung and many of her family members have died from it from working in the coal mines”

What is the most challenging part of the recording process for you?

Leslie: “Recording is so much different from performing live, there are so many things you have to be mindful of like tone, phrasing and intonation where as on stage you just sing and play with emotion, all those things sometimes fly out the window when you’re in the moment.”

What else can we expect from the new album and when will it be released for sale?

Leslie: “You can expect some real traditional bluegrass music with a new approach, some story telling, a few tears, but most importantly I think this album really tells a lot about who we are and we hope you enjoy it!”
Dewey: “The album will be released this week on all major distribution platforms, we really think you’re gonna like what we’ve put together and hope you will follow us and our journey.

Dewey and Leslie Brown have been married since 2007. They reside in Burlington, NC and have 2 children, Savannah Belle (7) and Dewey IV (4). They currently own a performing arts theatre, The Liberty Showcase Theatre, in Liberty, North Carolina.  They also have 2 festivals each year, DeweyFest and GospelFest, held on their 52 acre farm in Burlington.