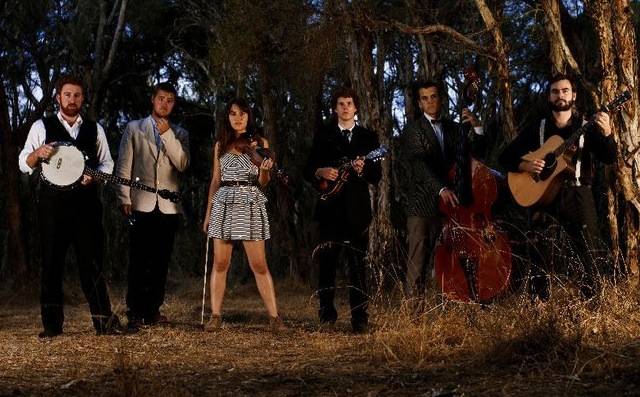 We have been alerted to a new website – Timber and Steel on which I found this great write-up on New Grass in Australia by Evan Hughes who has unearthed a host of emerging bluegrass bands from across Australia.

The article focuses on The Davidson Brothers, The Quarry Mountain Dead Rats, The Seals, Mustered Courage, The Lurkers, Merri Creek Pickers, The Perch Creek Family Jugband, Bellyache Ben and the Steamgrass Boys, The Pigs. Not a comprehensive list but a number of new and emerging bands nevertheless. Here’s the article reproduced here with the kind permission of the author:

The one folk genre that really seems to have taken off in Australia over the last couple of years would have to be Bluegrass. Originating in the Appalachia region of the United States, Australian artists have taken to the genre like a house on fire with new jam bands, string bands and pickers popping up all over the country.

Once associated with bearded old men plucking banjos and mandolins, the new Bluegrass (or New-Grass) scene in this country and overseas has seen a new generation of artists evolve (and in some cases subvert) the genre to create something very exciting. These artists are not just confined to folk, country and bluegrass festivals either – you’d probably be surprised to find that many of them are emerging from the urban indie-music scene in our capital cities and performing at mainstream festivals or New-Grass specific events like the recent Jamgrass Festival in Melbourne. We thought we’d spotlight just a few of our favourite Australian bluegrass artists to get you acquainted with the genre – but keep in mind this is just the tip of the iceberg and there’s plenty more where this came from. Let’s get pickin’! 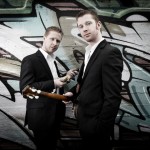 Hamish and Lachlan Davidson (above) from Yinnar in south-eastern Victoria are the shining lights on the Australian bluegrass scene at the moment having picked up Golden Guitars, appeared at festivals around Australia and even appeared on Spicks and Specks. The Davidson Brothers have really been embraced by the country music scene in Australia (bluegrass is one of those genres championed by country and folk fans alike) so you’re more likely to catch them at Tamworth than you are at The National – although they are scheduled for Port Fairy this year so that’s definitely not a hard and fast rule.

The Davidson Brothers, like most of their Australian contemporaries, are pretty traditional in their approach to bluegrass sticking with the tried and true instrumentation (guitar, banjo, mando) and singing with an American inflection. They’re also pretty savvy when it comes to social media (which you kind of have to be when you’re not based fulltime in a capital city) and we highly recommend following them on Twitter to keep up with everything that’s going on in the bluegrass and country world – @davidsonbrother

If you cast your eyes over the lineup for just about any festival in 2012 (Cygnet Folk Festival, Illawarra Folk Festival, Blue Mountains Music Festival, etc) you’ll probably come these guys are they seem to be everywhere at the moment. And as far as we’re concerned that’s a good thing.

WA’s entry into the Australian new-grass scene comes to us in the form of Perth six piece The Seals. Prolific buskers in their home town and bluegrass evangelists everywhere else The Seals combine guitar, banjo, fiddle, mandolin, bass and drums/percussion along with vocals from all five members (listen to their track “High” and tell us you don’t imagine the entire band crowded around a single mic Bill Monroe style).

The Seals have put together a lovely little mini-doco on themselves that you can watch below. Given how entrenched these guys are in the burgeoning new-grass scene don’t be surprised to start seeing them pop up everywhere – even if it’s just busking in your local mall.

Another Melbourne outfit is Mustered Courage (who seriously have one of the best band names going) whose mission is “to bridge a gap between traditional bluegrass music and the Australian alternative music scene”. While most of the music that Mustered Courage plays is original they are probably best known for their covers including Seal’s “Kiss From a Rose” and Boys II Men’s “I’ll Make Love to You”.

Mustered Courage released their debut, self titled album in September 2011 and toured it in Victoria and NSW. They’ve managed to get themselves some triple j airplay recently (which we guess helps them in their mission) and are about to hit Tamworth for the country music festival.

Timber and Steel has promoted Sydney based subversive bluegrass trio The Lurkers since we first launched and there was no way we were going to complete this list without us. The Lurkers are the point at which political activism and banjo picking meet – in fact the legend is they first got together after discovering a shared love of bluegrass while attending a climate festival. So much of The Lurkers’ music is tied to their political ideals from Pretty Boy Floyd’s graffitied guitar (sporting the Woody Guthrie inspired “This Machine Kills Facists”), to the lyrics of their songs right through to the gigs they play which take place both at festivals and climate rallies around Australia and the world.

The Lurkers slowed down for a moment last year following on from the birth of Desert Rat Shorty’s first child but yellow biodiesel-powered Lurker-van can once again be seen parked in festival camp sites and hooning around Sydney’s inner west with their second album Who’s Got a Padlock and Chain? in tow.

The ultimate jamband the Merri Creek Pickers see themselves as The Grateful Dead of the Australian bluegrass scene. The band have incorporated the very un-bluegrass electric guitar into their band and as a result regularly venture into country, folk and rock during their jams. But at they’re essence they are (as their name suggests) pickers and very fine ones at that.

The Merri Creek Pickers will be joining the likes of Justin Townes Earle and Lanie Lane at this year’s Boogie Festival which they’ve got to be pretty stoked about. They’re also regularly seen around their hometown of Melbourne along with a few other names on this list – track them down and check them out.

Jordie Lane described The Perch Creek Family Jugband’s new album Tall Tales as “A beautiful example of great bluegrass and ol’ time standards coming from this quirky Australian ‘real’ family band” when he chose it as his top album of 2011 in Timber and Steel’s poll. The Perch Creek Family Jugband have created this myth around them that often makes it hard to separate fact from fiction – apparently they include Australia’s top one-legged saw player, are all brothers and sisters despite their ever increasing numbers and their dancing skills are a direct result of being forced to dance on hot coals as children.

Speaking of children it’s not uncommon to see the vocal chores of The Perch Family Jugband shared with adults and kids alike. They’ve become a staple at folk festivals around the country, have appeared on Spicks and Specks and have toured extensively overseas. Fitting somewhere between a string band, a jugband and a dance troop The Perch Creek Family Jugband have to be seen to be believed

Bellyache Ben and the Steamgrass Boys

The new-grass scene in Sydney has become synonymous with one name in the last year: Bellyache Ben. Along with his band The Steamgrass Boys, Bellyache Ben has been holding court in Newtown’s Madame Fling Flong on Wednesday night’s where they tear the place up each and every week. Bellyache Ben and the Steamgrass Boys has a a whopping 7 members (and even more on a good night) covering everything from banjo to resonator to Dobro to mandolin to fiddle to washboard.

They’ve just launched their self titled debut album and have been announced for the Blue Mountains Music Festival so it looks like 2012′s going to be a big year for Bellyache Ben and the Steamgrass Boys. We have no word whether their Madame Fling Flong residency is set to return this year but we’re hoping it does – it’s just what the Sydney bluegrass scene needs.

What makes new-grass so subversive is that it breaks so many of the “rules” set out by bluegrass traditionalists. One of the biggest no-nos on the traditional scene is incorporating other musical styles and songs into the genre – something new-grass artists have done from the very beginning. Sydney quartet The Pigs are probably best known for their bluegrass cover of Beyonce’s “Single Ladies”, the video of which (featuring John Williamson) has garnered them more than 200,000 views of facebook. But The Pigs are more than just a one trick pony and they have a whole back catalogue of hilarious bluegrass covers and originals.

The blue chesty-bonds wearing boys completely a residency at Sydney’s Empire Hotel in November last year and have already been announced on the lineup of a number of festivals in 2012 including Port Fairy, Corinbank and The Northern Beaches Music Festival – it’s going to be a very big year for The Pigs.

Obviously this is not an extensive list and there are hundreds more Australian new-grass players out there. If you’re up for more banjo and mado pickin’ head to The Australian Bluegrass Blog or Jambands Australia and get exploring. We hope you’ve liked our little slice of bluegrass heaven – Evan Hughes.