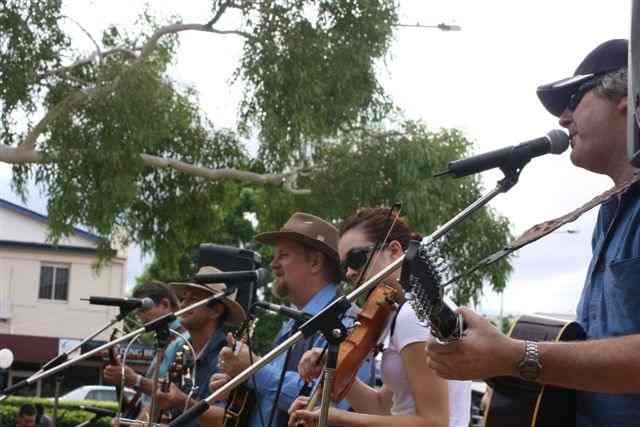 The Pluckers have been performing at the Australia Day celebration in Mount Isa for several years past.

The City Council organises a morning of entertainment on the lawn area in front of the City’s civic theatre in the main street. A free breakfast is provided to all who attend and the entertainment covers a period between 7am and 9am.

From this casual setting the focus moves inside the theatre where a Naturalisation Ceremony takes place in a more formal atmosphere. The Pluckers are usually asked to provide an item or two to complement this program and John Williamson’s ‘Chains‘ and the Queensland version of ‘Waltzing Matilda‘ have been the songs of choice for several years now.

Sarah Barker has played fiddle with the Pluckers for the past couple of years and she brings her Scottish Dance background with her as well. The group performance takes on a different aspect when Sarah puts down the fiddle and dances to ‘The Irish Washerwoman‘ before finishing with another fiddle break.

The longer term members of the band are Bazza Rodgers on vocals, guitar and mandolin, Stretch (Rob) Addington on vocals, guitar, dobro and bass, Spoons (Greg) Poppell on spoons, bass and vocals and Al (Allen) Shaw on five string banjo.

The Pluckers repertoire is eclectic. The group also performs many songs written by Stretch and Bazza. We all enjoy playing Blues numbers, have Paul Kelly, Paul McCartney, Bob Dylan and John Williamson songs in there; some American Bluegrass and Traditional; and of course, good ol’ Aussie Bush and Traditional Music.