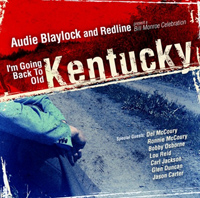 Rural Rhythm Records is proud to announce Cry, Cry Darlin’ from the album, I’m Going Back To Old Kentucky (A Bill Monroe Celebration) by Audie Blaylock & Redline, is #1 on Bluegrass Today’s Weekly Song Chart and #12 on the publication’s monthly chart.  “Audie’s vocal solo on Cry Cry Darlin’ has that soaring high lonesome tenor that will send shivers down your spine,” says Brenda Hough with the California Bluegrass Association.

The album has certainly been a big hit with radio with five songs from the album appearing on a variety of charts since the album’s summer release (Cry Cry Darlin’, I’m Going Back to Old Kentucky, In Despair, Mighty Dark to Travel, and Out in the Cold.)  Bluegrass Unlimited Magazine gave this project a big thumbs up saying, “The vocal work by Blaylock and others is topnotch, the instrumental support is right on the mark, and the Father of Bluegrass would no doubt find this release very much to his liking,” with Country Standard Time raving, “ Put it on, turn it up, and drift away!”

It is no wonder that the album has been a huge hit with fans, radio and media with the wealth of talent led by Audie Blaylock who also produced the album.  He is joined by Redline members:  Patrick McAvinue, Reed Jones, and Russ Carson, with special guests Del McCoury, Ronnie McCoury, Bobby Osborne, Glenn Duncan, Carl Jackson, Lou Reid, and Jason Carter.