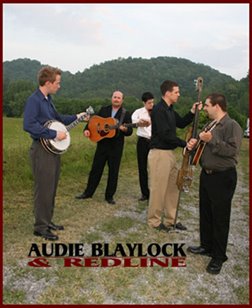 Rural Rhythm Records is pleased to announce they will release a brand new album by Audie Blaylock & Redline early 2009. The new CD will include the chart single, Lonesome Weary Heart, currently appearing on the Bluegrass Unlimited Top 30 Singles Chart and debuting this month on XM Bluegrass Junction’s Top 30 Tracks.

Grammy award-winning producer, Carl Jackson says, “Audie Blaylock is one of the most talented folks in bluegrass music today. He’s a top-notch guitarist and vocalist and I’m very pleased to know there’s a new project on the horizon. When Audie is involved, you can bet the music will be bluegrass at its finest”.

Rural Rhythm Records will now be handling future Radio requests and has also made the single available to Radio Stations via RadioSubmit.com

Audie Blaylock & Redline are scheduled to make numerous appearances at the upcoming International Bluegrass Music Association’s (IBMA) annual World of Bluegrass in Nashville including a performance at the IBMA FanFest.
Additional reading: