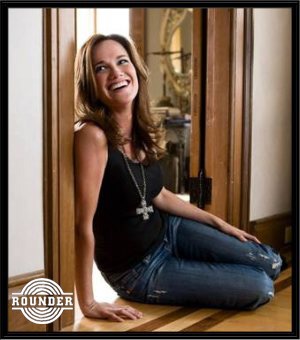 On 13th January Rounder Records will release Hillbilly Goddess, the new album by stunning vocalist Alecia Nugent. In the five short years since the release of Nugent’s debut CD, she has gone from being the toast of Hickory Grove, Louisiana to one of the most celebrated bluegrass & country singers across America’s heartland.

Hillbilly Goddess includes a classic-sounding heartbreaker titled The Writing’s All Over the Wall, and, as before, Nugent proves she can rip through a zippy bluegrass romp with ease – the feisty-female Wrecking the Train and the tongue-in-cheek Cryin’ All the Way to the Bank. However, Hillbilly Goddess plows some new ground. Nugent digs into lyrics with more poetry, complexity and depth than ever before, particularly in the ballads Wishin’ Hard, Already Home and the delicately lovely Don’t Tell Me.

Nugent also emerges as a songwriter on this album. In addition to her autobiographical Nugent Family Band, co-written with Dixie and Tom T. Hall, she was inspired to write the wry Hillbilly Goddess title tune with Carl Jackson and Sonya Kelly.