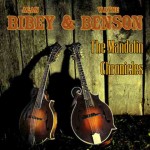 Alan Bibey and Wayne Benson, two of the greatest living award-winning mandolin players, have joined together to create some of the most exciting bluegrass music in recent history with, The Mandolin Chronicles. The album, to be released March 12th on Pinecastle Records, showcases the pair on ten instrumental tunes and one vocal tune, “Another Night,” featuring IIIrd Tyme Out’s Russell Moore. Bibey and Benson wrote six songs on the album, co-writing three of them. Other musicians joining them on the album include Ron Stewart on banjo and fiddle, Wyatt Rice on guitar, and Harold Nixon on bass. The Mandolin Chronicles is now available for pre-order from Pinecastle Music.

Alan Bibey and Wayne Benson were destined to record The Mandolin Chronicles. Both men are widely known for their virtuosity on the mandolin as well as their widely revered ancient Gibson mandolins on which they weave their sonic tapestry. Appropriately, Gibson has produced signature model mandolins for both men. 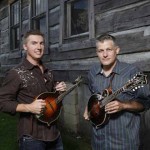 Alan Bibey was nominated in 2003 for a bluegrass album Grammy with a group he led called BlueRidge for the album Side By Side. He was awarded the Society for the Preservation of Bluegrass Music In America (SPBGMA) “Mandolin Player of the Year” in 2007, 2009, and 2010. He has been nominated for the International Bluegrass Music Association’s (IBMA) “Mandolin Player of the Year” several times.  With various projects he has been involved with over the years he has won IBMA’s “Recorded Event of the Year,” “Instrumental Recording of the Year,” and “Album of the Year.” I can track those specifics down if you need them. He has been on the cover of Bluegrass Now, Bluegrass Unlimited and Mandolin Quarterly.

This is one of the most special and purely fun projects I’ve ever been a part of. It reminds me of how much fun I had as a kid exploring the mandolin. The band really brought our originals to life as well as all the others. Love the live feel – Alan Bibey.

Wayne Benson was named SPBGMA’s “Mandolin Player of Year” for five consecutive years in the early 2000’s. He performed with “The Wreckers” (Michelle Branch) in 2006 and appeared on The Tonight Show, CBS This Morning, The Late Late Show with Craig Ferguson, and The View as part of their publicity tour. As a part of IIIRdTyme Out, Benson has won IBMA “Vocal Group of the Year” from 1994-2000 and countless SPBGMA awards.

I am really excited about this release. The many ‘Two Mandolin’ projects that came before this one like Jethro Burns and Tiny Moore or Sam Bush and David Grisman, Bobby Osborne and Jesse Mcreynolds and of course the Thile/Marshall recording have all been favorites of mine. Making a record like this with Alan Bibey was a highlight for me – Wayne Benson.

The Mandolin Chronicles is full of stunning melodies, breaks, and instrumental harmonies backed by full bluegrass instrumentation. The performances, while technically intricate, are also tasteful and beautiful. Mandolin players everywhere will be studying this album for years to come as it is destined to become a benchmark bluegrass album.

Pinecastle Records was created nearly 22 years ago as a favor to a friend and has since grown into a legendary label with nearly 250 releases in its catalog including titles from some of the most influential musicians in the bluegrass genre such as Eddie Adcock, The Osborne Brothers, Jim and Jesse and Charlie Waller & The Country Gentlemen. Pinecastle has always placed an emphasis on fostering the talents of bluegrass up and comers and has helped with the growth of the careers of Terry Eldredge, Jesse Brock, Josh Williams, and Kristin Scott Benson, among others. Today, Pinecastle is situated in the mountains of southwestern North Carolina owned by businessman and medical doctor, Lonnie Lassiter.