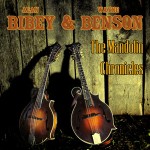 The Mandolin Chronicles, a benchmark bluegrass album from veteran mandolinists Alan Bibey and Wayne Benson, is now available in stores.

Their album is the perfect pairing of two of the best mandolin players in bluegrass’ modern era. Alan Bibey is a founding and current member of the highly respected band Grasstowne. Wayne Benson currently tours with IIIrd Tyme Out, a band which both men have been a member of. The two recently sat down with Kyle Cantrell at Sirius/XM’s Bluegrass Junction to record a track by track that will be airing soon.

Get the album now at: PinecastleMusic.com, Amazon.com or Itunes.

The album includes ten showcase instrumentals of which the pair wrote or co-wrote six. “Another Night,” the single and only vocal cut, is a waltz describing the heartbreak of lost love where guest vocalist, IIIrd Tyme Out’s Russell Moore, joins Alan Bibey on vocals. The instrumentals range from the familiar “Sweet Dixie” (written by Bill Emerson and Jimmy Martin) and “Pilgrims Knob” (written by Bill Monroe) to more harmonically and rhythmically adventurous tunes like “Black Friday” (written by Alan Bibey and Wayne Benson) and the jazzy “Now’s the Time” (written by jazz legend Charlie Parker). The pair seems at home with whatever style they end up playing and have created plenty for fans of the mandolin and just plain good instrumental bluegrass.

I just received Mandolin Chronicles and it is outstanding! What could be better than two incredible mandolin players working together – Jim Fisher, WGCS Radio.

Wow! It’s great. But with these two and the players supporting them, that almost goes without saying – Billy Meyers, WRFL Radio.

Wayne Benson was named SPBGMA’s “Mandolin Player of Year” for five consecutive years in the early 2000’s. He performed with The Wreckers (Michelle Branch) in 2006 and appeared on The Tonight Show, CBS This Morning, The Late Late Show with Craig Ferguson, and The View as part of their publicity tour. As a part of IIIRdTyme Out, Benson won IBMA “Vocal Group of the Year” from 1994-2000 along with countless SPBGMA awards.