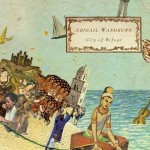 City of Refuge released on 11th January on Rounder Records is the third album by acclaimed singer and clawhammer banjo player Abigail Washburn, is streaming in its entirety on NPR Music and featured alongside her Tiny Desk Concert.